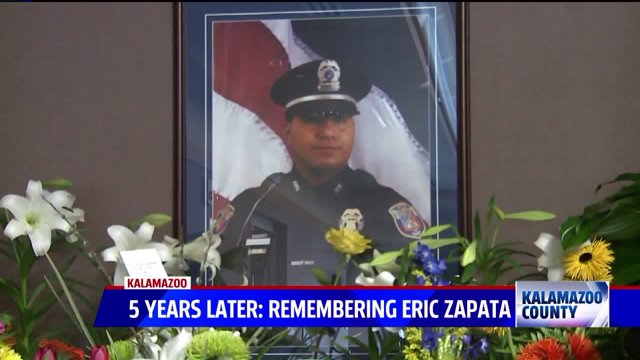 KALAMAZOO, Mich. — The Kalamazoo Department of Public Safety has not been the same since April 18, 2011. Officer Eric Zapata was shot and killed that night. Chief Jeff Hadley said his death hit their tight-knit department hard.

“Anytime that you go through something of that magnitude, certainly losing a fellow officer, you know we are a family,” said Hadley. “That really kind of makes you reflect upon what’s important. And what isn’t important, probably more than anything.”

Hadley said Zapata, 35, was just about to get off work at midnight when he was sent to the 1400 block of Hays Park. An officer was shot and Zapata immediately went to the scene for assistance. Once he arrived, he began looking for suspect, police later identified as Leonard Statler.

“Eric came through the houses and jumped a fence when he landed on his feet in the alley, that’s where he confronted his assailant,” said Hadley recalling what happened that night. “He had no idea he was standing there.”

Police said the suspect then opened fired and killed Zapata, a father of three kids. He later turned the gun on himself in the alley. Officers rushed Zapata to Bronson Hospital but it was too late.

“It really did have a huge impact on the organization,” said Hadley. “We’re just going to continue to do what we do and remember Eric the way he should be remembered.”

Two years after his death, a bronze statue was dedicated in Zapata’s honor at the Kalamazoo mall. Saturday, two dozen family, friends and officers gathered to remember him.

“We don’t get to see them everyday,” said Hadley of the Zapata family. “Maybe a couple of times a year. So we had a small but respectful ceremony down at the statue.”

Hadley said the department will continue to remember Zapata for years to come.

“Eric was such a joy to be around. He always had a smile on his face. Never met anyone he didn’t like,” said Hadley. “That’s what certainly I remember most about him and others is that he was just a fine, decent human being in addition to being a public safety officer.”