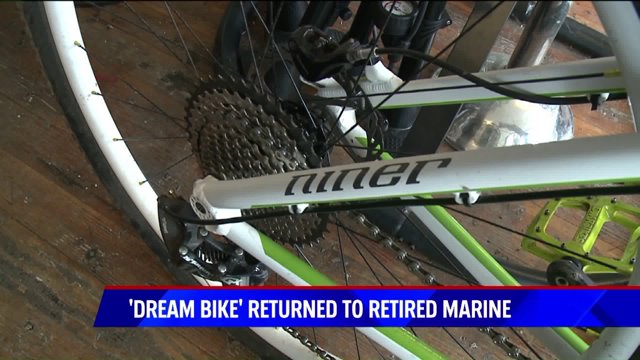 KALAMAZOO, Mich. – Last week, Allen Lipscomb thought he’d never see what he called his ‘dream bike’ ever again. Just days earlier, the retired Marine and current student at Grand Rapids Community College left an afternoon class to find his $2,300 cycle missing off the rack it had been chained up to.

He filed a report with campus police, but didn’t have much hope the bike would resurface.

About one hour after Allen discovered his bike was gone, it was being wheeled through the door at K-Zoo Swift, a Kalamazoo bike shop run by Ryan Barber. Unaware that the bike had been stolen just hours earlier, Barber purchased the state-of-the-art custom cycle for $800 cash – far less than half its true value. He collected the seller’s information and didn’t think much more about it.

It wasn’t until a few days later that one of Barber’s friends made him aware of our original story, and the bike’s original owner. So, Barber reached out to FOX17 and less than a week after Allen’s bike went missing, he was riding it once again.

"I’ve had a bike stolen from me,” said Barber, “and even to this day I still keep my eyes out for it. I might be out a couple dollars but at least the owner has his bike back."

Barber says he plans to eat the cash he spent on the bike. He doesn’t mind – saying for a fellow bike enthusiast and veteran, it was money well spent to get the bike back into the right hands. Allen, meantime, is equally as happy with the way things worked out.

“I didn’t think I was going to see it again,” said Lipscomb. “Seeing it come out of the trunk was like, ‘get out of here. You got to be kidding me.’”

Besides a flat tire, the bike was as returned to Allen in the same condition as the day it went missing. As for the individual in the security footage that sold the bike to Barber, Barber says he plans to turn it over, along with the information he collected, to police.