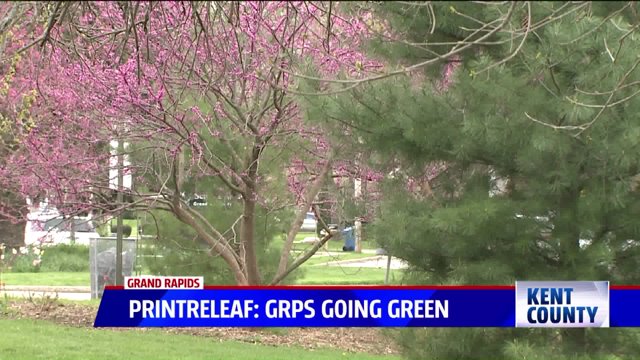 GRAND RAPIDS, Mich. — Grand Rapids Public Schools uses a lot of paper on a daily basis as a necessary part of running the district. And of course, all of this paper comes from trees. However, GRPS is now giving back to the environment using a program that plants a tree for every box and a half of paper it uses.

The program is managed by a company called PrintReleaf. They estimate a box and a half of paper is equivalent to one tree. "We partner with printer dealers, so Applied Imaging here in town is the first adapter of the Print Releaf technology," said Anne Petruzzi, Director of Business Development with PrintReleaf. "And their software is already sitting on top of printers, so they're partnered with GRPS and they manage all of GRPS's printing.

So far, GRPS has planted around 3200 trees -- most of them in a rain forest in Madagascar. They will also be planting trees locally -- mostly on district grounds. "It's consistent with the GRPS transformation plan," said John Helmholdt, GRPS Spokesperson. "It's consistent with the superintendent's goal of working with Mayor Rosalynn Bliss and the City of Grand Rapids to achieve that 40 percent tree canopy goal that the city is set for.

GRPS is the first district in the state to use PrintReleaf. They hope other districts in the region — as well as businesses — consider using the technology.