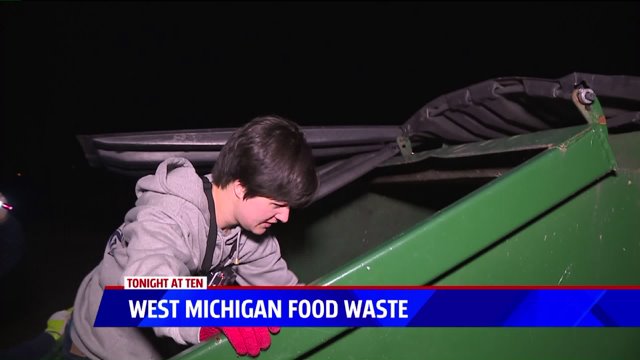 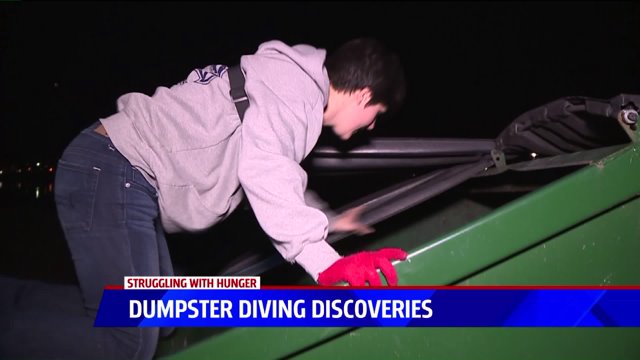 GRAND RAPIDS, Mich. -- With 40 percent of all food in America thrown out and never eaten, 49 million people nationwide struggle with hunger at some point, according to Feeding America West Michigan.

FOX 17 took the lid off this major problem to see what is tossed out and went dumpster diving.

Standing alongside seasoned dumpster diver Sunny Dickson, she dug out seven bags of clementines from a Grand Rapids-area store dumpster. A few clementines were smashed while the rest were webbed in packaging and looked to be perfectly fine.

“There’s a whole case of them that’s been thrown out, lord knows why," Dickson said digging through the dumpster.

From sun-ripened food that is packaged and driven to our refrigerators, 20 percent of the food we buy is thrown out, according to the Natural Resources Defense Council and Ad Council 2016. While 40 percent of all food in America is wasted, one in six Americans struggle with hunger throughout their lives.

Walking up to the dumpsters Dickson dug through, FOX 17 observed there were no fences surrounding the dumpsters; no signs stating 'no trespassing;' and therefore, no expectation of privacy.

Explaining as she looked inside, Dickson said, "We just hop in, and then you don’t want to dig too deep ‘cause it’s food and if it’s been sitting out all day and it’s been buried that’s no good.”

As she rifled through torn boxes she dug out those bags of clementines. Then several packaged asparagus, onions, a new scale in its box and other packaged fruit, including pears.

These findings bring up the question that Sunny asked holding a bag of clementines, "I don't know why they threw all these out?"

Dickson said in seven years of dives she has not had any problems with eating the thrown out food.

“I think it’s very disheartening to see how much is being wasted," said Dickson.

Continuing to dig, she explained to FOX 17 some of the unwritten rules of diving:

"I was super poor when I was in college and like actually legitimately needed the things that I was finding, needed the food, needed those things."

FOX 17 asked strangers to step back and think about what they have tossed, and then write it down.

Writing on a whiteboard, "1 in 6 Americans face hunger, but 40 percent of all food is thrown out. If you've thrown out good food, write it down," we placed this in downtown Grand Rapids.

Within several hours one group stopped while many walked past leaving us nine responses: chicken, grains. water salad and pizza.

“One of the things that runs through my mind now when I go to the store is, ‘I wonder if I could find this in the dumpster if I came here later tonight?’”said Dickson.

To learn tips on how to make food last longer or to see how this affects your budget, see SavetheFood.com.