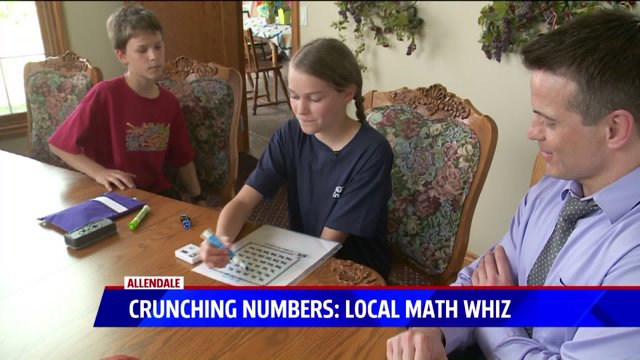 ALLENDALE, Mich. – A young high school student from Allendale has won the national number knockout championship, an honor that includes a $10,000 prize!

13-year-old Sophia DiPiazza can calculate math equations with mind-blowing speed.  She was one of 16 math wizards across the nation who took part in the May 3rd competition.

"Well I was kind of nervous but I wasn't really stressed because I just like playing the game so it was actually really fun when we were knocking out the numbers,” said Sophia DiPiazza.

The game is called Number Knockout, and it includes a board with 36 numbers and some dice. People play by rolling the dice and using the numbers rolled to knock out the numbers on the board.  Students are given 60 seconds to use math to generate as many equations as they can with square roots and exponents.

It may seem like a mind numbing math problem to some, but for Sophia, it’s just a fun game that is even useful in the real world.

"Bringing her to the grocery store, she can add up faster than the teller with machines," Says Rebekka DiPiazza, Sophia’s mom. “It’s really neat, it's a life skill that's going to help her."

Her trophy is a pair of boxing gloves, signed by all the national number knockout competitors.