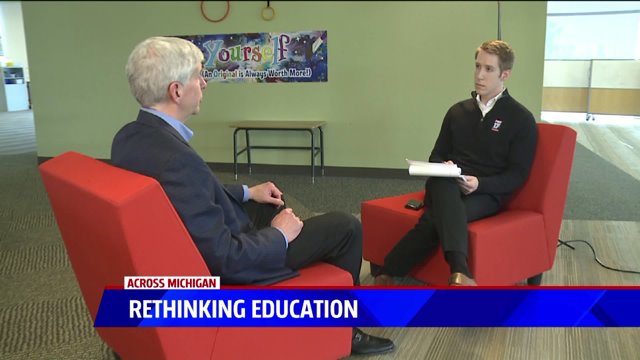 LANSING, Mich. — Gov. Rick Snyder wants to rethink how students are being educated in Michigan, and he's launching a commission to do just that.

The “21st Century Education Commission” will convene to study how other top-performing schools and districts elsewhere in the country operate in order to create proposals aimed at improving Michigan’s own public education system. Amid the ongoing water crisis, the education commission was among just a handful of non-Flint issues to recieve attention during Snyder's State of the State address in January.

For parents, it's an opportunity to re-imagine how their child's classroom operate, what courses are taught, and even how the school year is structured.

“We’ve had essentially the same system for decades, and one of the classic illustrations I give people is the long summer vacation," Snyder said. "Why do we have a long summer vacation? I don’t want to say that’s an answer, but isn’t that an important topic we should be talking about?”

Snyder says the eventual goal is to allow parents and others in the public to weigh in and help shape long-term proposals to shape education for the next two decades.

“How often in life to you get the opportunity to take two steps back and open up your mind to say 'are we asking the right questions to begin with, let alone are we doing the right things,'" he said.

The 25-member commission will include individuals representing education, business and government. The governor will appoint 16 members, while the remaining positions will be filled by four legislative appointees, the State Board of Education president or his designee, and four state department directors or their representatives. Snyder said the appointment process was slowed after he requested his advisers also consider younger candidates.

The group will focus on how Michigan’s system of public education is organized, governed, funded, and held accountable.

>> MORE: "The facts on education funding in Michigan" here.

While integral, rethinking how education is funded in the state will simply be a part of the "balancing act," Snyder said.

"It's the last step, because too often—particularly when you get into government issues—people jump to money first, that’s backward," he said. The real question is: what is the problem you’re trying to solve, what is the most thoughtful solution, and then how do you measure if that’s going to be successful. Then you figure out the funding."

Charter schools, blamed by critics for siphoning off students and subsequent funding from public schools, will play an integral role in the future of education in the state, Snyder said.

"I think having the mix of models is a good thing," he said. “I don’t view the state’s role as being the value judgement as saying it’s one or the other, our role is to say let’s make sure you’ve got a good answer no matter what you choose.”

Members for the commission are still being vetted.  Snyder says he wants input from the public once the commission begins meeting in the coming weeks.

"This isn’t about people who are bureaucrats doing this, these are community leaders, leaders in education," he said. "These are thought leaders, and isn’t it a good thing to get people together in a nonpartisan, broad-based fashion to talk about a longer term?”