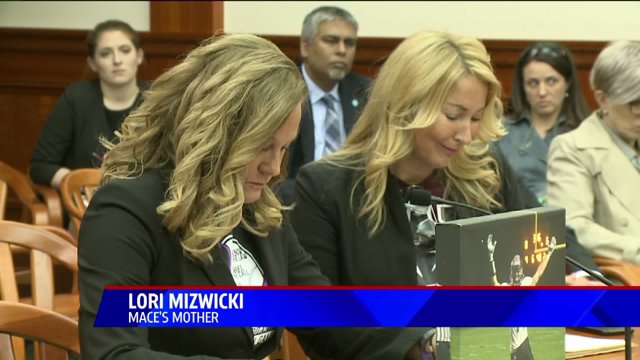 LANSING, Mich. — A West Michigan mother who fought to successfully change the state's "Good Samaritan" law after her teen son died from a prescription pill overdose wants to take it even further.

Lori Mizwicki is pushing for limited immunity under the law for all ages who report a suspected overdose involving any type of controlled substance.

In December, Gov. Rick Snyder OK'd an amendment granting immunity from prosecution to people under age 21 who report a prescription drug overdose. The exemption was similar to a "Good Samaritan" law already on the books for minors who help someone in danger of alcohol intoxication.

"It affects everyone, doesn’t matter," Mizwicki told FOX 17. “Adults are suffering from heroin and prescription drugs, it’s not just kids, and people are left to die.”

The change was spurred by the death of Mizwicki's 16-year-old son, Mason—a stand-out student athlete and popular Watervliet junior—who consumed a lethal dose of methadone while attending a New Year's Eve 'skittles' party.

“We know Mason made a bad decision, but most of the time when you make a mistake, especially at 16, you get a second chance," she testified before lawmakers in Lansing on Tuesday.

“I believe he would be alive today had his friends been able to call and know they wouldn’t be in trouble."

Rep. Al Pscholka, R-Stevensville, who co-sponsored the bi-partisan amendment, called the changes to the law the most important work he's done during his five years in the legislature.

Pscholka said the law change already saved the life of at least one teen in his home district of Berrien County, exactly one year to the day of Mason's death.

"It was New Years Eve of this last year and we had a young woman pass out from prescription drugs," he said. "Someone had seen a story about this law, picked up the phone and made a call, emergency help arrived and she’s alive today.”

Both Pscholka and Mizwicki remain adamant the law changes do not condone drug use but acknowledging the reality of a growing overdose epidemic.

In Van Buren County, one in four deaths are now overdose-related, while sheriff's deputies in Berrien County deployed the life-saving drug Narcan to reverse four overdoses in just one week, according to Pscholka.

"This isn’t being soft on drugs or soft on crime, this about being smart and getting emergency help for people," Pscholka said. "This is an epidemic and this is a response to that.”

Despite efforts to fight the opioid epidemic, deaths from drug overdoses reached an all-time high in 2014, according to the most recent data made available from the Centers for Disease Control and Prevention. Deaths from overdoses of prescription drugs and heroin continue to be the leading cause of unintentional death for Americans, rising 14% from 2013 to 2014.

Michigan is one of 14 states that has seen “statistically significant” increases in the rate from 2013 to 2014.

Mizwicki says her work advocating for law changes has helped open the dialogue about drug use in her community.  She now speaks regularly to area students and continues to amass a following through the Forever Mace Facebook page.

The "Good Samaritan" expansion bills were unanimously passed out of committee Tuesday. With widespread bi-partisan support, the bills are expected to be fast-tracked for a vote soon.

This Thursday, Caledonia is hosting a Good Samaritan Softball Game to increase the awareness of the Good Samaritan Law. The team will play Portage Central High School at 4:15pm. It will be the second Be A Good Samaritan Game played after Watervliet played Hartford a week prior.