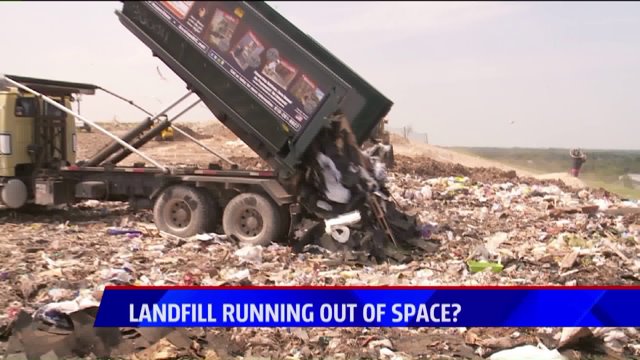 Kent County has over 600,000 residents generating nearly 1.8 million cubic yards of trash each year according to Darwin Baas, Director of the Department of Public Works. It’s a growing rate of garbage he says can’t be sustained for long.

“It’s seasonal, but we usually see a couple hundred trucks a day and the waste is anything from residential food waste, construction debris,” said Baas. “It’s material that we have to do a better job sorting out before it ever comes here.”

The Michigan Municipal Solid Waste Characterization Evaluation Project conducted by the county in 2015 found: between standard recycling and compostable food and yard waste, nearly 75 percent of waste dumped in the Kent County landfill should have been reduced, reused or recycled. These findings estimate the landfill will run out of room for trash in roughly 10 years.

“Instead of it going for scrap or something it’s ending up here and we’re burying it, and we’re never going to go back again and find it,” Baas said

“The damage economically is we’re throwing away nearly $400 million worth of material every year [state wide],” Schoonmaker said.

That’s roughly $52 million thrown into the trash right here in West Michigan, which eliminates nearly 370 jobs, according to the study.

So why aren’t we recycling and what can we do about this problem?

“The easiest answer is inconvenience,” said Schoonmaker. “People as a culture don’t seem to prioritize recycling as much as you think they would. People don’t like to put in extra effort or pay the extra money.”

Schoonmaker says it’s up to residents and business owners to make a commitment to reduce, reuse and recycle. The goal is to eliminate as many materials from the waste stream as possible.

The Kent Country Department of Public Works is now asking residents to partner with them by making a pledge to recycle smarter. The 'Imagine Trash' campaign seeks to reduce waste going into landfills by 20 percent by 2020 and by 90 percent by 2030.

“It’s no longer acceptable to bury 1.3 million tons of waste in landfills every year,” said Baas. “I have conversations with manufacturers and retailers and residents saying, ‘Yes, we want to reduce our waste but we don’t know where to begin.’ There is broad community interest to move the pendulum the other way and, as a community, we’re going to transform the way we manage waste. We need to change.”

For more information on the role you can play, take the pledge at www.imaginetrash.org