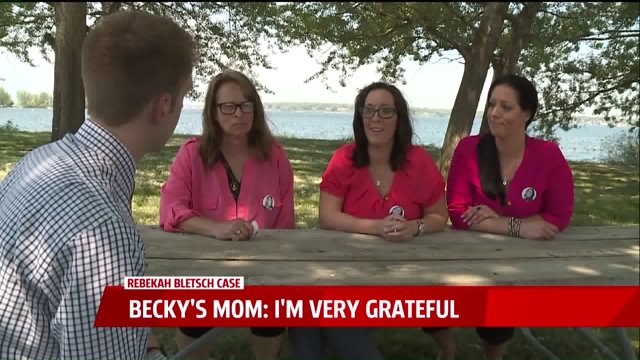 MUSKEGON, Mich. — Nearly two years after Rebekah "Becky" Bletsch was gunned down on the side of the road and left for dead, her family says there is some comfort in knowing the person suspected of killing her is no longer on the streets.

"You expect to feel good or relieved and it’s not that at all; and then you see what’s attached to it—who they think did it—he’s a sick individual.”

On Wednesday, Jeffrey Willis was charged with one count of open murder in connection to Bletsch's death on June 29, 2014. The 36-year-old mother and wife was jogging less than a mile from her home in rural Dalton Township when she was shot in the head and left bruised on the side of the road. Her family believes she put up a fight.

“It relieves some of the anger I have inside of me," said Nicole Winberg, Becky's sister. "I was angry for a long time and now to know we have the individual off the streets, I don’t have to wonder."

Winberg said the family has lived two years looking over their shoulder, not knowing who or if the person suspected of killing their relative was nearby.

“Two years we’ve lived with every day questioning, sitting in a restaurant, standing in line at the store, playing at the park with your kids," she said. “It’s nice to know the authorities did their job and they did it well enough to find the individual.”

Last week, Jeffrey Willis was arrested and charged with an attempted abduction of a 16-year-old girl who managed to jump from his van to safety in April.  Following his arrest, investigators found a gun that matched the size of the gun used in the Bletsch murder.  Ballistics tests confirmed a match to the .22-caliber shell casings found at the scene where Bletsch was shot, according to court documents.

“This is a good day, we’re on the road to resolution," Becky's father told media after investigators announced the charges. "It’s been a rough couple years but we’ve had our faith and trust in law enforcement and they haven’t let us down.”

Investigators said Wednesday they had no reason to believe Bletsch knew her alleged attacker. Asked of a possible motive, Muskegon County Prosecutor D.J. Hilson said there was no clear evidence of a motive, other than calling Willis a "sick individual."

“I believe it was just random," Josephson told FOX 17. "The whole time I’ve just said this was a random act, anybody who knew Becky, nobody would’ve done this to her.”

Investigators also hailing the 16-year-old girl who escapade from Willis a "hero," while crediting her for setting the chain of events into motion that lead police to Willis.

Bletch's family say they believe Becky was with the teen in spirit at the time of the attempted abduction. Someday, they said, they hope to thank her for what she did.

"That little girl is a brave, strong individual and my heart goes out to her," Jospehson said. "I thank her for what she did, she has no idea what she’s done for our family."

The family said they remain confident that investigators have the correct suspect, adding that while nothing will bring back their loved one, they believe justice is finally being served.

“I don’t think it's ever going to get easier, I truly don’t. [Becky] played a huge role in our family," Winberg said. “The word closure is something that doesn't fit for us. We continue to mourn the loss of our sister."

Josephson said they appreciate that their family continues to receive support from the community.

“It’s not going to change what we deal with, but I think it changes part of the community," Jospehson said. "We don’t fear—this person is off the streets—he can’t do this to somebody else."

Willis is also considered a person of interest in the 2013 disappearance of Jessica Heeringa, who disappeared while working her overnight shift at a Norton Shores gas station. The Bletsch family said they are hopeful Heeringa's family can find justice and peace soon too.