Morning Buzz- 5 things to know for May 31 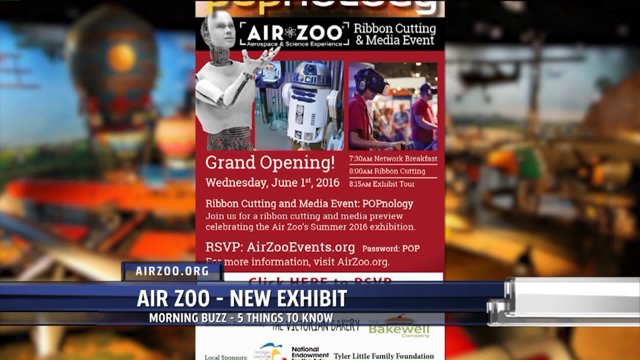 Years of erosion caused many cracks in the concrete and the surface to become uneven.

The catwalk that runs the length of the pier needs to be removed and replaced first, which puts the project back another $1.5 million.

So the Grand Haven Community Foundation is looking for donations to help save that.

The Army Corps of Engineers will start renovating the landmark following this year’s Coast Guard Festival.

2.  If you're in the market for a new car, Tuesday could be a great day to close the deal.

May has one fewer car-selling weekend than last year.

So automakers are going to have to roll out special incentives to turn the month into a winner, and buyers may get the upper hand.

3. In celebration of 75 years of partnership with the USO, Coca-Cola has rolled out patriotic themed cans.

The new ones are red, white and blue, and feature the lyrics, “I’m proud to be an American.”

The cans honor members of the military and will be in stores through the Independence Day holiday.

The limited edition cans also promote the joint campaign “To Connect,” co-sponsored by the USO.

The group is trying to get one million messages of support to members of the armed forces.

4. After a two and a half year absence from American television, Simon Cowell is back on the air.

He'll be a judge for the 11th season of “America’s Got Talent.”

Cowell helped lead the way for these reality shows with the start of "American Idol.”

"America’s Got Talent" starts Tuesday night, but it’s not as if he’s out of practice offering opinions.

Since the U.S. version of “The X Factor," Cowell has been a judge on “Britain’s Got Talent” and the United Kingdom's “X Factor.”

5. Here's something you can do with the kids this summer.

The Air Zoo Aerospace and Science Museum in Portage is getting ready to open their new exhibit Wednesday.

It's called "Popnology" and is a large hands on exhibit that shows how pop culture has influenced technology today.

The official ribbon cutting is at 8 a.m. Wednesday and the exhibit runs through the fall.