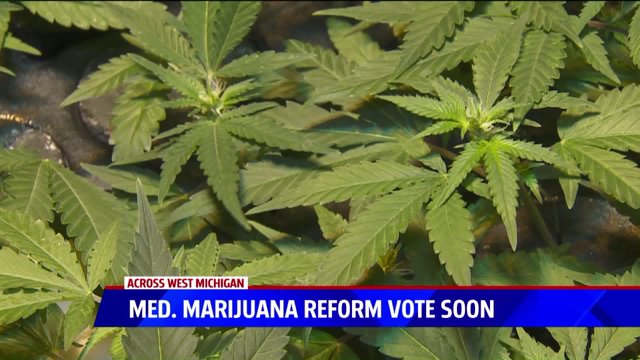 LANSING, Mich. — A long-awaited vote on reforms to Michigan's vaguely written medical marijuana laws could happen as soon as this week in the state Senate.

The reforms—seeking to add regulations to dispensaries, create a tracking system for plants and further clarify usable forms of medical marijuana—overwhelming passed in the House last October.

But in the seven months since, the reforms stalled in the Senate following continued disagreements on a proposed tiered licensing system that was later added. The changes prompted many medical marijuana patient advocates who'd previously been on board, including Robin Schneider with the National Patients Rights Association, to withdraw support of the bills.

“It was a matter of making regulations crystal clear for law enforcement purposes," Schneider said . "But it turned into a situation with a lot of diverse business interests, trying to implement their preferred business model. Our only goal was to protect the patients."

"Her life is in the hands of these Senators right now," said Ida Chinonis, whose daughter uses cannabis oil to treat her seizures.

The tiered system proposed regulating growers, distributors and retailers in a way that's similar to how the state regulates alcohol. Schneider contends the tiered system didn't make sense in a situation more aptly comparable to a pharmacy than a liquor store, where doses vary by case and patient.

Sen. Rick Jones, R-Grand Ledge, chairman of the Senate Judiciary Committee, once a strong advocate of the tiered licensing system, this week signaled a compromise had been reached in order to move forward on a vote.

"We’ve worked very hard to make sure every Senator understands cities, townships and places are all saying we need this very badly," he said. “Because they want to specifically tailor a pharmaceutical product for patients and children, it was felt the grower and distributor could work together. But there still has to be a break, police want to be sure we can track from seed to sale.”

Ida Chinonis sits on the Capitol steps with her daughter Bella, 7.

It's welcome news for Ida Chinonis of Grand Blanc, whose 7-year-old daughter Bella suffers from a genetic disorder, causing epilepsy and potentially life-threatening seizures. It wasn't until Bella began using cannabis oil a year and a half ago that she was able to do things she never could before.

Not only are Bella's seizures under control when using cannabis oil, she can stand on her own for the first time in her life, can form sounds and tones with her mouth, reach for objects and respond to her name, her mother said.

"It’s helping her be the little girl she was meant to be," Chinonis said. “We are just flabbergasted by the results we’ve seen."

Chinonis said she's hopeful lawmakers will act quickly, and is pleased the focus of the reforms is placed back on protecting patients.

"[Bella's] life is in the hands of these Senators right now," she said. “The state needs to pass these laws, they need to protect us and I need to know I am safe giving [cannabis oil] to her and that she is safe and protected.”

Rep. Lisa Posthumus Lyons, R-Alto, who sponsored the bill to legalize alternative forms of medical marijuana, said the reforms are a long time coming for patients.

"There's all this talk of decriminalizing recreational marijuana, but my message has been that we've got to get medical marijuana right first."

In February, an economic impact analysis by Hillsdale College suggested the proposed regulatory reforms for medical marijuana would generate between $44 million and $63 million a year in new revenue for the state. The report was commissioned by the Michigan Cannabis Development Association.