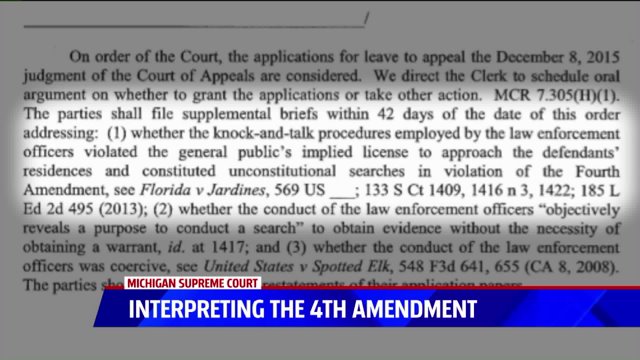 GRAND RAPIDS, Mich. -- For the first time, the Michigan Supreme Court will consider a so-called 'knock and talk' case, and look into the boundaries of the Fourth Amendment in the case against two former Kent County correctional officers, and medical marijuana patients, charged with having pot butter.

Mike Frederick (left) and Todd Van Doorne (right), former Kent County correctional officers. The Michigan Supreme Court is looking into whether the 'knock-and-talk' used against them was unconstitutional.

Two recent wins for former correctional officers of 23 years, Todd Van Doorne and Mike Frederick: the Michigan Supreme Court will hear oral arguments, likely this fall; and both will be be able to use the affirmative defense of the Michigan Medical Marijuana Act in their upcoming July trials.

FOX 17 spoke with Van Doorne's Attorney Bruce Block who said he's elated after recalling the March 2014 morning when seven KANET officers, including two direct supervisors of Van Doorne and Frederick, woke their families without a warrant.

"It’s darker than the ace of spades at 5:30 in the morning at that time," said Block.

“I don’t see what was really gained here by going in the middle of the night besides terrorizing some families, and I don’t use that term lightly."

In the last two years, the case has been appealed twice: both Kent County Circuit Court and then the Michigan Court of Appeals' opinion called this knock-and-talk constitutional.

“After reading that Court of Appeals’ opinion, there are no standards hardly anymore," said Block.

Now the case is in the hands of the Michigan Supreme Court for a second time, which will hear oral arguments to determine:

“The way they did it was just simply outside the bounds of what is allowable: it fails the girl scout cookie test," said Block, “because a girl scout wouldn’t be selling girl scout cookies with seven people with guns; it just wouldn’t happen at 4, 5, 5:30 in the morning.”

Block said this has even greater implications statewide and beyond, to future other states' judges looking for advisement, as it's the first knock-and-talk case the Michigan Supreme Court will consider.

“This will be definitely a watershed in my opinion, as far as clarifying what is allowed: what can police officers do if they don’t have a warrant," said Block. "If they want to talk to somebody, what are they allowed to do?”

FOX 17 also spoke with Kent County Undersheriff Michelle LaJoye-Young Wednesday who said this particular knock-and-talk was "completely appropriate." She added that the Lt. and Sgt. that morning are part of their department's small team that goes on all knock-and-talks.

Kent Country Circuit Court trial dates are set for July 11 and July 25 at 8:30 a.m. for Frederick and Van Doorne respectively.

Stay with FOX 17 for case developments.