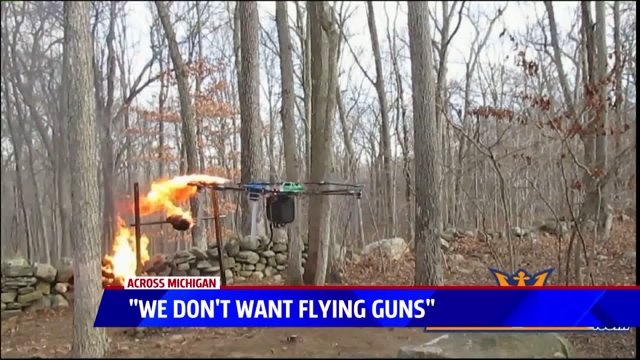 LANSING, Mich. (AP/WXMI) — Legislation would make it a crime in Michigan to weaponize an unmanned aerial vehicle.

Democratic state Rep. Jon Hoadley of Kalamazoo says: "We don't need flying guns in Michigan." He says the legislation introduced earlier this month would make it illegal for weapons, even those legally attainable in Michigan, to be attached to a drone.

“This is one of those where no matter where you fall on the Second Amendment conversation, most people agree this far exceeds that and there is too much danger associated with it," Hoadley told FOX 17.

"The responsible gun owner can’t even imagine pulling the trigger without seeing the sightline, but that’s exactly what could be happening with these drones.”

The bill lists several Democrats and Republicans as sponsors. Hoadley says the state "shouldn't wait for something terrible to happen."

“You don’t wait for a house fire to buy fire insurance," he said. "In the state of Michigan we shouldn’t have to wait to put a regulation on flying firearms before we actually see it above our schools and homes.”

Hoadley said lawmakers will also discuss whether to approve harsher criminal penalties for individuals who use a weaponized drone to commit a crime.

That being said, “certainly I would be gravely concerned if someone were trying to weaponize a drone," Young told FOX 17.

The restrictions being proposed would also apply to law enforcement, according to Hoadley. Young said it's not in the county's plans to weaponize drones for use in the field.

"Anytime you’re deploying any kind of force you have to be very careful that force is controllable, that you can be certain of the security of it," she said.

Lawmakers in other states like Connecticut have recently pushed for similar measures to restrict weapons on drones in wake of videos posted to YouTube of a man's drone firing an attached handgun and a flamethrower.

MLive.com reports state lawmakers are considering more than 20 bills related to guns that were introduced in 2015 or 2016.

Michigan earlier passed laws barring people from using a drone to hunt game and prohibiting the use of drones to harass hunters.