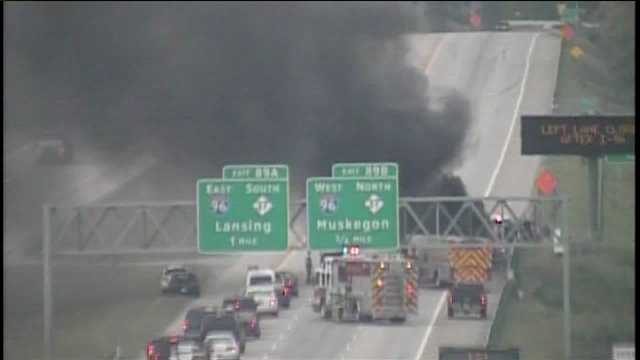 PLAINFIELD TOWNSHIP, Mich. -- Traffic was blocked during the morning rush on southbound U.S. 131 south of West River Drive Monday due to a crash and car fire.

The crash appears to have started when a driver in a Jeep rear-ended a pickup truck.  Both those vehicles ended up in flames.  A third vehicle was also hit but escaped the fire.

The Kent County Sheriff's Office says that one of their deputies was further ahead of the crash scene, stuck in construction traffic, when he was alerted by another motorist of the crash.

Deputy Skip Kimbrough turned around in the median and found the crash, with a woman trapped inside one of the burning vehicles.  He and three other motorists were able to break the vehicle's windows and get the woman out.  She was taken to the hospital with undisclosed injuries.