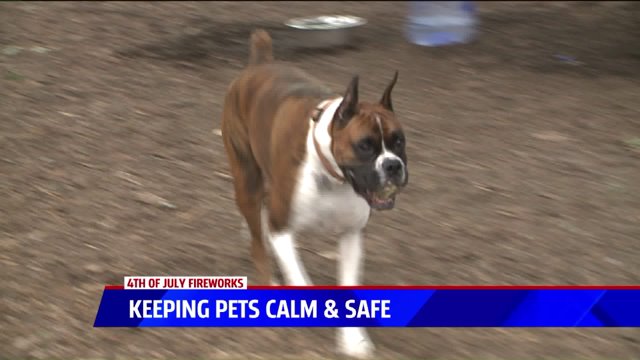 GRAND RAPIDS, Mich. -- The Fourth of July can wreak havoc on a dog or cat's well-being.  According to Blue Pearl Veterinary Partners, there's a 25 percent increase in animal hospital visits on the holiday. Either they've gotten hurt and/or become anxious.

"Every dog I've ever had has been afraid of the noise," Kathy Helms said.

But Helms counts her boxer Tuxedo as one of the fortunate few. He isn't phased. But fireworks aren’t the only concern for your pets around the Fourth.

"Anybody that owns a pet has to pay pretty good attention to what they get into because they get into everything. They're worse than kids," Helms chuckled.

Pet owners need to be aware of certain foods prevalent at barbecues and picnics that can get stuck in their pet's body, like chicken bones and other items that don't digest so well.

"Sometimes corn cobs that they might eat because they're covered with butter and so delicious, and then just other table foods like grapes, caffeinated beverages," Swanson explained.

As an emergency animal hospital in Grand Rapids, she said the clinic sees medical cases similar to what people deal with. To keep pets from darting out the door during the fireworks and getting lost or hurt, Swanson said sedatives are an option if necessary.

"So there are some medications that are available now that are newer, and some that have been used for a while to help just curb that anxiety so the pet isn't just sedated but actually much more comfortable and calm," Swanson said.

It may be common sense, but pets owners should also keep their animals away from people lighting fireworks.