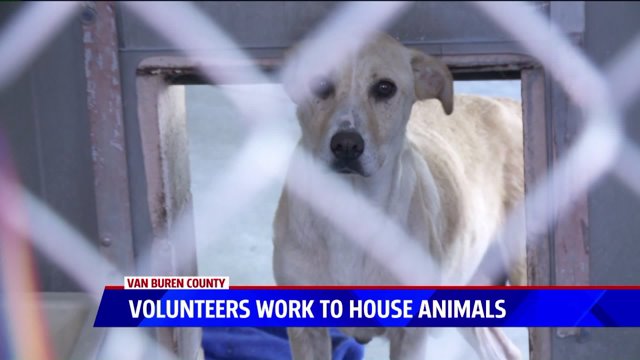 VAN BUREN COUNTY, Mich. — Over a hundred dogs, cats and two owners all lived together in the same house. Tuesday, Van Buren County sheriff deputies changed all that.

“The smell was horrid, feces and urine all over the house,” said Sgt Dan Abbott with the Van Buren County Sheriff’s Office. “The outside was the same thing.”

Abbott said the animals’ bowls of water were filled with algae and mold. In total, that afternoon deputies counted 108 dogs, 8 cats, 5 horses and donkey living inside and outside of the two-story home in Lawrence Township. The animals, including puppies and kittens, were taken to local rescue centers and a one horse is being tended to at a nearby barn.

“They were all covered with fleas,” said Sgt. Abbott about the dogs at the Animal Control center in Van Buren County. “The shelter went through them one by one and give them their baths and did things like that.”

Eighty-three of the dogs were taken to the kennel on County Road 681. Most of the dogs were playful, not afraid to bark or come close to the volunteers. But others were timid, lying in their cages silently.

“They’re adjusting,” said kennel director Kasey Murphy. “We’re still kind of feeling out who needs what. Things that kind of weren’t as apparent yesterday due to the stress, due to just adjusting to things to the shelter.”

Murphy said rescue workers, a group comprised of veterinarians and volunteers from pet organizations, have been working tirelessly with the dogs. Each dog has been given proper food to eat, clean water to drink and medical attention. Some of the workers found that the puppies have worms in the stomachs.

“I have an amazing network of my rescues that when I said we have some problems, they didn’t even ask what they were,” said Murphy. “They have been working 7am to 5, if not later.”

The workers have been bringing food and supplies with them.  Local pet stores have donated pet necessities as well. As for the owners, Donald Smith and Melissa Coppen, they were arrested and are now facing charges. Coppen recently told FOX 17 that she tried to get the authorities to help with the dogs.

“It’s actually not uncommon,” said Sgt. Abbott. “You see it all over where hoarders hoard animals just like anything else.”

Murphy said she starting to see the dogs relax a little bit but they’re not ready for adoption. That’s a decision for the courts. Right now, she and the rescue workers are focused on getting the dogs to a healthy state.

“I just want what;s best for the animals,” said Murphy. “That’s it.”

If you’d like to make a donation:
The Van Buren County Sheriffs Office ask that all donation items be dropped off at 205 S Kalamazoo Street, Paw Paw, MI 49079. They'll take puppy food, blankets, toys, other miscellaneous supplies and money.