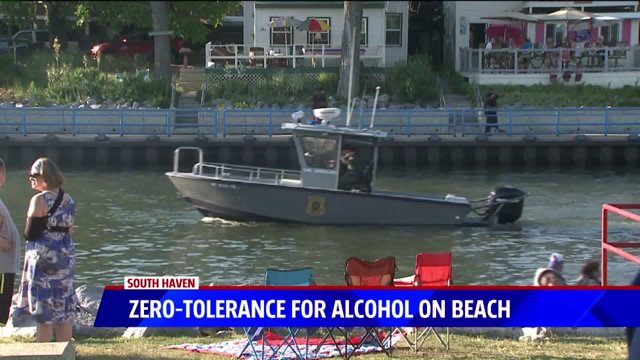 SOUTH HAVEN, Mich.—Several communities across West Michigan are holding their Fourth of July fireworks shows this weekend, including South Haven, where police have been ramping up their efforts to keep people safe.

Nearly 80,000 people have visited the beach this weekend. Police say it’s one of the largest crowds they have ever seen in South Haven and with that many people in such a confined area there’s bound to be some problems.

To keep everyone safe, there are nearly 90 officers pairing up to patrol the beaches; some of them are working 16 hour shifts.

“We have Allegan County, Van Buren County, Michigan State Police, the Pokagon Tribal Police and all of our officers that work for South Haven Police Department working” said Sgt. Chris Mersman from South Haven Police. “Nobody gets a day off today.”

Sgt. Mersman says it’s pretty typical to call in police from neighboring counties just to account for the crowds.

“So far we’ve had just a few alcohol related arrests” said Mersman. “We have on our north beach designated areas of access just so we can control the amount of people on the beach. We are searching people’s coolers just to try to limit the amount of alcohol that is being brought onto the beach.”

In an effort to keep the weekend family-friendly, South Haven Police has a zero-tolerance for alcohol on the beaches.

“We just keep things under control with police presence” said Mersman. “We saturated the beaches and areas that we’ve designated as hot spots to try to keep peace.”

The people in South Haven for the day say it seems to be working.

“We haven’t seen anything too crazy around here” said Nicole Sanic. “Everybody seems to be pretty well-behaved.”

“With the amount of people here I can’t believe how peaceful it is” said Ron Sanic. “It’s well-conducted.”