GVSU record holder to compete in the Masters National Championships 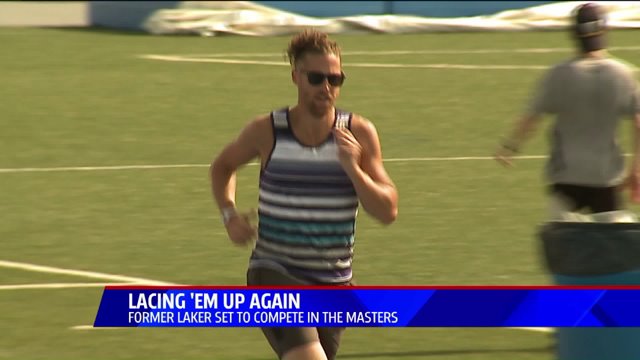 ALLENDALE, Mich -- It’s been over a decade since Pat Garrett ran track at Grand Valley State and while he is still the schools record holder in the 400 meters, he stopped running after his final season as a Laker in 2004.

“I was a sprinter and all my buddies wanted to run 5K’s" Garret said,  "I absolutely had no interest in running distance what so ever, one lap is my absolute max.”

Garrett now lives in nearby Wyoming with his wife and two children and began running again in December in anticipation of competing in this week’s National Championships at his alma mater.

“It was one of those things where friends were giving me crap because I kept saying I could do it" Garrett added, "one friend particularly got me to get off my butt and I finally decided to put down a program and start focusing on it and working towards this with this weekend being the culmination of my training.”

So when Garrett began training he went all in, competing in GVSU’s track meets in his mid-thirties.

“I entered myself in a couple of races and was quickly humbled by running with college kids versus a thirty five year old dad who has a full time job and has to chase two toddlers around and can only work out so frequently.”

With all his time away and the caliber of athletes competing, Garrett considers himself a bit of an underdog this weekend.

“I think I’ll do okay I don’t want to say I’ll finish mid pack I’d like to finish toward the front of the pack but a lot of thing have to go well for me this weekend in order for me to make that happen.”

It all kicks off at 8 a.m. Thursday, Pat runs at three on Friday and at three on Saturday.