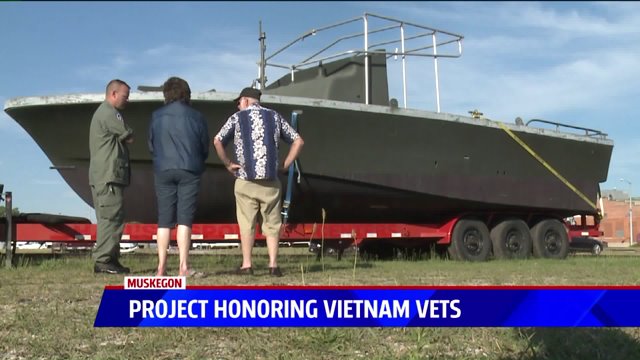 MUSKEGON, Mich.-- An Army Reservist in West Michigan has made it his mission to take care of a group of veterans he calls the 'black sheep'. Robert Bowyer started Operation Black Sheep to honor Vietnam veterans. Now, he's renovating an authentic Patrol Boat River, or PBR boat, which many Vietnam veterans will recognize.

Bowyer has had the PBR boat for less than a week, but he already has big plans for it.

“I’ll have the two 50's in the bow of the boat, I’ll have the aft 50 over this exposed cover here, there were steel plates that came up that had two m-60’s on it and I’m going to take people out for rides," said Bowyer.

Bowyer, an Army Reservist with two tours of Afghanistan under his belt, has experienced first-hand what it feels like to be an outsider.

"One of the things I love about Operation Black Sleep is when you go to war, you come back and you're different from the community, from the rest of the world and it was hard for me, it really was," said Bowyer. "But I'm not alone."

Bowyer was given the PBR boat as a long-term lease; he'll have it for at least 15 years. By next April, he plans on taking veterans out on the water.

“You come ride on it, go out, hear the diesel engines like it was in Vietnam, you smell it, all that stuff, you can’t beat that," said Bowyer.

People can rent the boat with Bowyer as their captain, but four days each month are only for veterans.

In just a few days it's already catching some attention. One couple even followed Bowyer with the boat home, the husband was a Vietnam vet grinning from ear to ear just at the sight of it.

“Now he drives by my house every day and says 'Hi' and just to see that smile on his face it was like a five year old at Christmas and for me I’m like man I got to do that," said Bowyer.

But before the boat is operational, Bowyer needs some help.

“I need fabricators, mechanics, just people with knowledge," said Bowyer. "As a historian  I can do the research, and then money. If a guy can afford to do something like hey I can pay to have your engines fixed up, right there that’s something.”

To learn more about Operation Black Sheep and how you can help, click here.