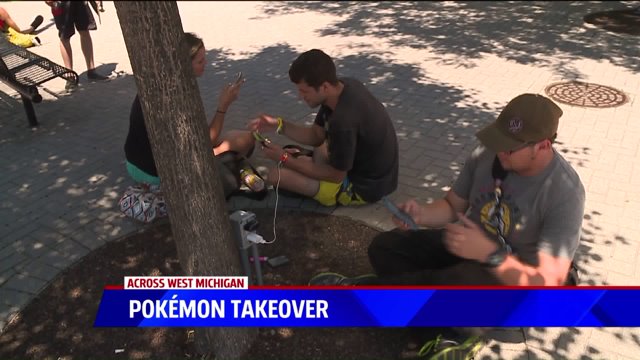 GRAND RAPIDS, Mich. - Pokemon Go is creating big business for local restaurants and shops, but it's not all fun and games.

As the Pokemon Go craze continues taking over West Michigan, local businesses are looking to cash in by offering deals and discounts to players. But it comes at a price.

"Lots of loitering, lots of people just sitting in our chairs, whether it's inside or outside," said Stephanie Damian, an employee at Biggby. "They're using outlets to charge their phones and they're not buying anything."

However, businesses across the area are seeing more customers than ever thanks to the game.

"Our sales have increased probably $500 per day,"  Damian said.

Frederick Meijer Garden's PR manager, John Vanderhaagen, says they're seeing a large spike in business because they're such a hot spot to catch Pokemon.

"You can definitely tell that everyone is playing the game when they’re looking down and not looking up," said Vanderhaagen.

Some Pokemon fans are wanting to play so badly, they're jumping the fence at the gardens to get in at night.

"We have seen an uptick in after hours visitors, which has been a bit of a problem, but we do have security here 24/7," Vanderhaagen said.

The Grand Raids Police Department is now encouraging players to have fun and be safe after tackling some of their first Pokemon Go related crimes: 3 suspicious circumstances and two noise related complaints.

"Be hydrated, take water with you  and wear a hat," says Sgt. Dixon. "Please be aware of your surrounding conditions. Before you know it, you may have stumbled upon a Pokemon while playing and you don't even realize you're standing in the street."