Farmer explains why cherries were left to waste 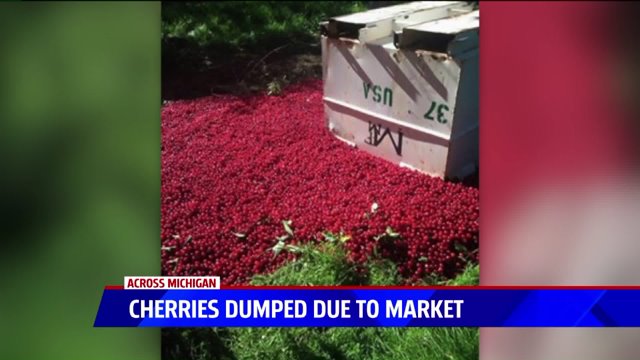 TRAVERSE CITY, Mich.  — They say a picture is worth a thousand words, and two of them may have been 'frustration' and 'sadness' for Facebook users after seeing a picture that went viral of thousands of pounds of tart cherries going to waste in northern Michigan.

Those same two words came to mind for Marc Santucci, owner of Santucci Farms in Traverse City, who had no choice but to leave 40,000 pounds of its crop to rot on the ground this year.

Santucci says he was forced to do this because of market restrictions by the Cherry Industry Administrative Board (CIAB) — restrictions that are designed to keep the price of tart cherries stable.

"I was just notified when we started shaking the trees that 14 percent would have to be kept off the market, so it didn't give me time to find any alternative action," he said, adding that tart cherries only have a two-day shelf life.

"Once the person who buys my cherries determines how many he's going to take, the rest have to be dropped. Or they could be given away, but I would have to know well in advance so I could find someone to process them who's also willing to give their time and effort in processing to give them away."

Santucci said he had a fantastic crop this year, and so did the cherry industry as a whole.

"We produced 100 million more pounds this year than last year — the industry as a whole. And that's what's sort of driving this, but it's not going to end. I mean we're going to have all these restrictive cherries and inventory. They'll be overhanging the market for years, and if we have another good year, it's really going to create a problem."