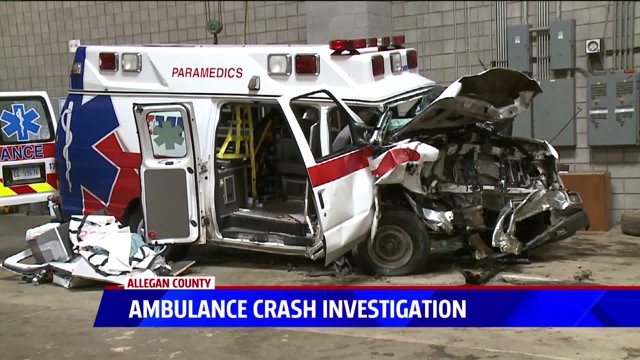 ALLEGAN COUNTY, Mich. — The Allegan County Sheriff's Department says three people, including two EMTs, were injured in a head-on crash involving a pickup truck and an ambulance over the weekend, but authorities investigating the incident say the implications could have easily been deadly.

"This was one of the most severe crashes where I've had people who weren't immediately fatal in either vehicle," said Capt. Chris Kuhn of the Allegan County Sheriff's Department. "It was a severe impact and I think that's obvious if you see pictures of either vehicle."

The crash happened at about 4:30 a.m.  Sunday near 141st Avenue and Blue Star Highway.   The ambulance crew was returning from standby duty when their vehicle collided with the truck.

Tim Hoffman, an 11-year veteran of American Medical Services, suffered severe head injuries that left him hospitalized in critical condition.  The driver of the ambulance, Kevin Jongekryg,a 23-year veteran of AMR, suffered head and leg injuries and has since been released from the hospital.

Investigators say Hoffman was in the back of the ambulance at the time of the crash.   There was no patient in the vehicle, and AMR as well as the Allegan County Sheriff's Department will investigate to determine the exact circumstances that caused Hoffman to be unseated at the time of the crash, in accordance with national policies.

In the meantime, Capt. Kuhn and the rest of the law enforcement community are wishing both Hoffman and Jongekryg a speedy recovery.

"They're part of the public safety team," said Kuhn, "and so we worry about them just like firefighters and other police officers. They're out there doing their job just like we are and these things happen."

Crazy Horse Steakhouse and Saloon in Holland announced on their Facebook page that they are hosting a gift card collection for the two EMTs.   The restaurant asks anyone interested in helping Jongekryg and Hoffman drop off gift cards at the restaurant.  They suggest gas, grocery or Visa gift cards.