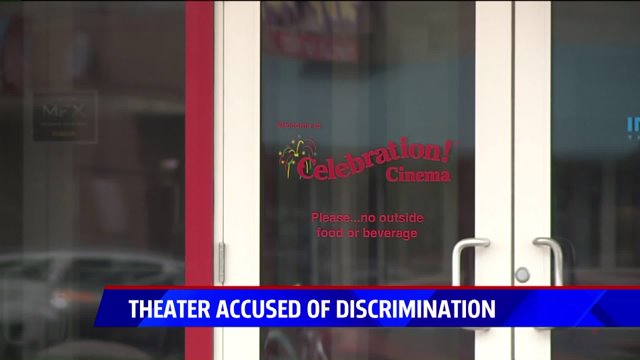 Graham Forsey, 23, a St. Joseph resident who is deaf, alongside the National Association of the Deaf filed a lawsuit Monday against Loeks Theatres, Inc., also known as Celebration! Cinemas. Forsey says he asked the Benton Harbor theater multiple times in writing to provide captioning and Celebration! Cinemas failed to accommodate, according to the lawsuit.

“It’s about access," said Mary Vargas, an attorney representing the plaintiffs. "It’s about Mr. Forsey and members of the National Association of the Deaf being able to go to the movies.”

A non-profit representing more than 137,000 Michiganders who are deaf and hard of hearing, the NAD is suing Celebration! Cinemas with Forsey stating this failure to provide captioning technology violates a basic civil right as specified under the Americans with Disabilities Act among other laws. Meanwhile, Forsey says he is forced to drive about an hour to another movie theater which accommodates him.

Celebration! Cinemas responded to FOX 17 Monday and confirmed their Benton Harbor theater does not have any captioning accommodations, releasing this statement:

"We’re fully aware of the issues surrounding this complaint and new technologies will help resolve it very soon.

The National Association of Theatre Owners (NATO) has been working actively with advocacy groups to clarify updated standards for supporting the deaf community.  These standards are currently being reviewed by the Department of Justice, and we expect a ruling from them in the very near future.

Celebration! Cinema is committed to continuing to improve services for all of our guests, and we are looking forward to the approval of these standards so we can continue to invest in closed captioning technology.  Currently, we have assisted listening devices in all locations and closed captioning in our Grand Rapids and Lansing, MI markets. Benton Harbor and other locations will receive captioning equipment in the coming months upon the adoption of the new standards.

Technological solutions for visually and hearing impaired guests are evolving at a rapid rate. We look forward to working collaboratively with NATO and advocacy groups both locally and nationally on this topic.

Closed captioning technology is readily available at other movie theaters. It ranges from open captioning an entire audience would see, to captioning glasses, or individual devices that fit onto a theater seat.

"It's frustrating because it’s been so many years since this was a legal requirement for theaters," said Vargas. "There are roughly 137,000 people in the state of Michigan who are deaf and hard of hearing, and guess what? They’re just like everybody else. They like to go to the movies.”