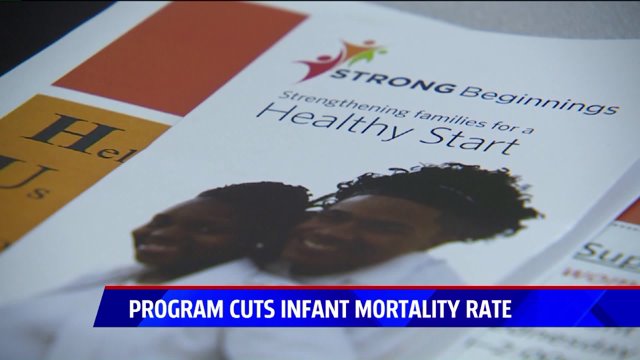 GRAND RAPIDS, Mich. -- Losing a child is any parents worst fear. That's why local counselors, coaches and nurses are working together to improve birth outcomes for African American and Latino mothers across Kent County.

The American Hospital Association recently presented their NOVA award to the program called "Strong Beginnings" for improving community health. In fact, in a little more than a decade the program has cut the black infant mortality rate in half.

While program director Peggy Vander Meulen says it was great to be recognized, she says she won't be satisfied until every Kent County baby survives.

Strong Beginnings consists of several Kent County Agencies, all working to enhance the health of African American and Latino mothers, fathers and babies from pregnancy through childhood.

Delores and her three kids

"It’s really good to know that you have support and somebody in your corner to help you," said Delores Robinson, who has been involved in Strong Beginnings since 2012. "If you don’t know where to go, they know where to take you. They have the resources to say, this is what you need to do, this is who you need to call."

"I set some small goals when I first started: one of those goals was to move out and to go start college." And Robinson says she has accomplished that.

Community health worker Acacia Beelen says it's her job to ease at-risk women like Robinson into motherhood and to do it face-to-face in the comfort of their homes. Her task is to promote breast feeding, goal setting and safe sleep for babies. On a typical day, she visits three families a day and tries to see them at least twice a month until their youngest baby is two years old.

"It humbles me in some ways," Beelen said. "It’s rewarding, and it’s day-by-day, but if we don’t have this program who's going to be the listening ear to our community?"

Program director Vander Meulen says the community was once in dire need. A decade ago, Grand Rapids had the highest black infant mortality of any city in Michigan, and Michigan was one of the worst states in the countries in infant mortality. In 2001, black babies were dying at a rate of more than five times than white babies, Vander Meulen said.

"It was lack of education," Beelen said, such as keeping babies on their backs and keeping blankets out of their beds.

Today, the infant mortality rate continues to drop. Still, black babies are dying at twice the rate as for whites. Vander Meulen says those numbers are still appalling.

"Until there is no disparity between black and white and Latino deaths, our work is not done."

Robinson and her three kids are proof Strong Beginnings is working.

"You never know how it can affect the lives of not only them but their children," Robinson said. "I’ve accomplished a lot since being in the program."

Strong Beginnings is hoping to start their fatherhood program for Latino men this fall.

To apply, you must live in Kent County, be expecting a child or have a child six months or younger.