Girl beating cancer asks for birthday cards from around the world 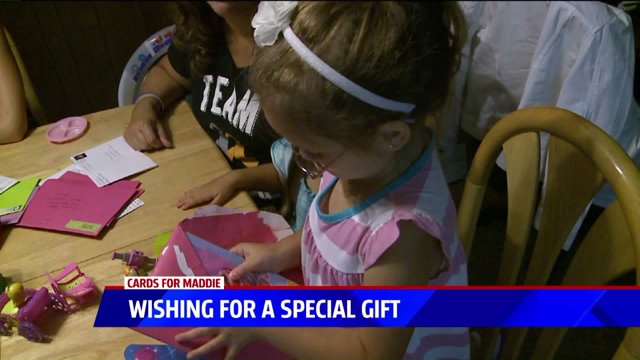 KENTWOOD, Mich. -- A five-year-old from Kentwood who continues to beat the odds against a rare form of brain cancer has a special birthday wish: she's asking to open birthday cards from around the world.

"What kind of things do you want at your party?" her mother Tracy Pagel asked.

Turning six-years-old on Sept. 4, Maddie hopes for a lot of birthday cards with a special My Little Pony party theme.

Already, cards mailed from across the country are stacking up, making a pile too tempting not to open just one for the almost birthday girl.

These wishes mean the world to Maddie, a fighter who has come so far.

“Three years ago before we started clinical trial we were going home in hospice," said Tracy Pagel. "And I was like no we’re not, nope she’s three.”

Despite living so much of her five years treating Choroid Plexus Carcinoma, in and out of hospitals, Maddie is the one telling her mom she doesn't have it.

To send a birthday card to Maddie, please mail here:

If you want to follow Maddie on Facebok, see her two pages: her story here and also #TeamMaddieStrong.

Next month, Maddie's clinical trial of three years will end and her mother says they along with her medical team will monitor her tumor and health at that point.

If you would like to donate to help with medical expenses, see their GoFundMe page or PayPal.