Finally a beer made only from Michigan grown hops 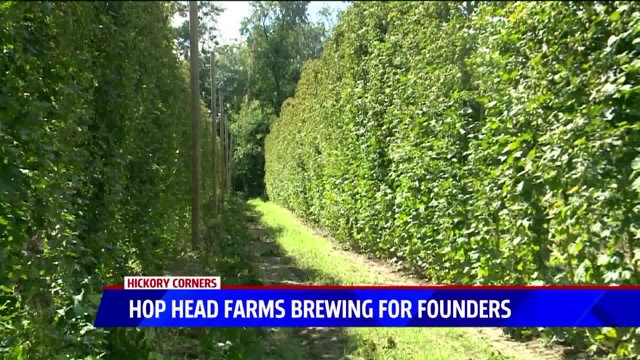 GRAND RAPIDS, Mich. -- Founders Brewery, FOX 17's co-sponsor for Tribute on the Grand, crafted a signature beer for this weekend's events. The beer is called Palm Reader and the hops for the special brew are grown on a farm right here in West Michigan.

It's the locality that makes the beer unique. Most of us know that Grand Rapids is fondly called Beer City, U.S.A, but you may not know that most hops that go into all that local beer is actually grown in Washington and Oregon. It's the lack of out-of-state hops that makes Founders' Palm Reader stand out from the crowd.

The Crystal and Zuper-Saazer hops that go into Palm Reader are grown nearby at Hop Head Farms in Hickory Corners. “Just several years ago, there wasn’t enough hops supply in Michigan for the medium and large producers to grab a hold of Michigan hops and make them consistently over and over again," grower Jeff Steinman explains.

Hop Head Farms began as a small experiement by Jeff and his wife Bonnie to see if hops could indeed thrive in the harsh and unpredictable weather Michigan provides. It's now grown into a 500-acre operation, providing Michigan-grown hops to more than 200 breweries.

Described as a crisp, bright and delicious brew perfect for Michigan beer lovers, Palm Reader is certain to be a crowd pleaser. All proceeds from Palm Reader sales goes to the Grand Rapids Whitewater Project. It's fitting for a Michigan based brewery, Founders, to partner with a Michigan based hops operation, Hop Head Farms, to work on restoring a prominent water feature in Grand Rapids...after all the main ingredient in beer is water.