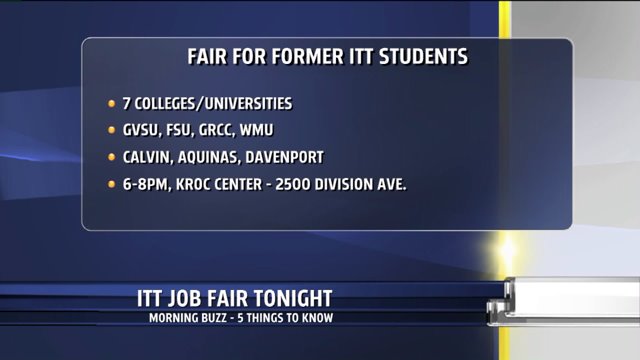 1. A local non-profit is hoping to build up Grand Rapids’ west side, and they’re asking for your help.

The West Michigan Center for Arts and Technology offers classes in careers like illustration, video game design, and pharmacy tech.

Currently, the organization is on Fulton, but on Wednesday officials announced a relocation campaign, in the hopes of moving to a new location at First and Seward, but they're $1 million away from their goal.

An anonymous donor is matching gifts from now until the organization reaches $200,000 in donations.

2. Grand Rapids public schools have 10 million reasons to celebrate this morning, after getting a big grant.

There was a watch party on Wednesday, where students found out the news.

It's just one of five schools in the country that's earned the title of "super school,” and only one of 10 across the globe.

The school will get the money over five years.

The school shut down after it was cut off from federal funding, and barred from allowing students to use federal aid.

Today's fair is going on at the Kroc Center on Division Avenue in Grand Rapids, where representatives will answer questions about credits, classes, and more.

4. Health officials say 20 people in West Michigan have tested positive for the Zika virus so far this year.

The most affected area is Kent County, with 11 confirmed cases.

Ottawa County has nine confirmed cases, with several other counties reporting between one and four cases.

Across the entire state, there are 53 confirmed cases.

But the State Department of Health and Human Services says these cases are related to travel, and were not contracted from local mosquitoes.

5. Uber is debuting its self-driving cars.

Currently, the Ford Fusions are available for a select group of customers in Pittsburgh, who can accept the invitation via email.

The cars all feature 20 cameras, seven lasers and three inertial measurement units to help customers get where they are going.

There is also a safety driver who can take the wheel in case of an emergency.

Uber says it picked Pittsburgh as its first city because driving there is harder than most cities.