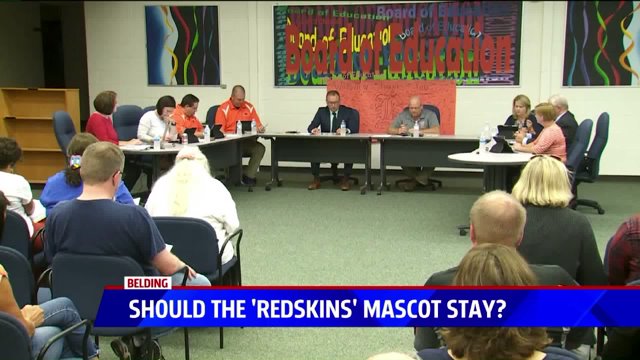 BELDING, Mich. -- Embrace a controversial mascot, or get rid of it?  That's the question parents and school district leaders are trying to tackle in Belding.

The district's teams have been called the Redskins for decades.  Although they've shied away from promoting the name or logo for years, there's now a push to make a final decision on whether or not to keep it at all.

Discussions on the school mascot continued Monday night, and representatives from Native American tribes made their voices heard.

"These mascots tell us that we aren't human," said Melanie Fish, an Anishinabe tribe member.  "I'm just a skin you can rip off me and sell to somebody for 250 bucks.  That's what it reminds me of."

The district has opted for a Belding B in recent years, but there's a community push to either bring the Redskin mascot back or officially pick a new one.

The board set a date for future committee meetings to further discuss the mascot name.  The first meeting is set for Oct. 11 and the second on Oct. 17.