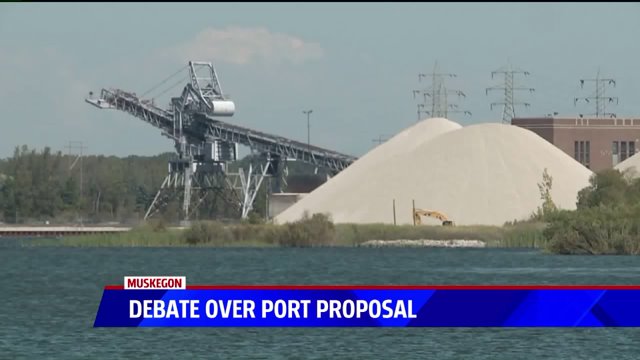 MUSKEGON, Mich. — It's a promise of jobs and economic prosperity along the lakeshore, but not everyone is convinced.

Rep. Holly Hughes, R-Muskegon, is among a group of legislators and business and community leaders pushing to establish a port authority in Muskegon to create more opportunities for shipping goods in and out of West Michigan.

With shipments of raw bulk materials like coal and rock dwindling in wake of the closure of B.C. Cobb Consumers Energy coal power plant and Sappi paper mill, Hughes says there is a need to make up the lost shipments.

“When we lost Consumers Power, we lost 660,000 tons of shipping (coal)," she said. "We’re slowly making up that tonnage—some of the companies have been—but we want more economic growth, like it used to be before I was born, using our ports.”

Hughes' bill would amend the state's Port Authority Act to allow an authority to be established in communities where the ports are owned by private operators, which is the case in Muskegon.

Current law limits the creation of port authorities to communities where the ports are publicly owned. Detroit is the only publicly owned port in the state.

Hughes said the change would allow for the establishment of a private-public partnership, which would enable the state to compete with maritime commerce in other states.

“It’s basically a framework to concentrate on increasing what we ship into the port and increase jobs," Hughes said, adding her desire to see Muskegon compete with Chicago.

"I think Chicago has plenty of business to spare, so I wouldn’t mind tapping that a little bit.”

Hughes also argues Muskegon's port is at risk of losing federal funding for dredging by not being able to meet a one-million ton shipment threshold established by the U.S. Army Corps. of Engineers. Dredging is the process of removing material underwater to keep the primary commercial channels clear for shipping freighters. But according to a report from the Great Lakes Dredging Team, 13 harbors below the one-million ton threshold received funding for high priority dredging in 2016.

Max McKee, president of West Michigan Dock and Market Corporation, argues the establishment of a port authority would only create unfair competition and encourage the murky use of public funding, like grant money, for projects on privately owned facilities.

“I see this as a question of choosing winners and losers," McKee said. “It’s about the possibility of another level of government also able to access funds, to then use those funds to compete with docks already in the business, that’s our concern.”

But Hughes contends the proposed amendment is meant to help, not hurt private port owners. The proposal would provide protections for private port owners, including removing the ability of the authority to condemn property  or authorize a millage request. The bill would also require direct authorization of a port operator before any port authority could begin work on their property.

McKee says the 'build it and they will come' mantra is irresponsible, adding that the majority of shipments into the area now are bulk raw item materials which don't create dock jobs because the shipments are unloaded by automated machinery.

"People talk about ‘building up the port,’ but we have had roughly 11 foreign cargoes—commercial ships—come through here in the last 20 years carrying something other than bulk shipments,” he said. “It’s not like there’s a whole lot of congestion out there on the lake."

McKee says any future business would be easily managed by the existing private commercial docking facilities and ample existing port capacity, with no need for involvement from an authority.

"It’s just bad policy, it’s bad for the taxpayers, it’s bad for our state," he said. “Make no mistake, that’s taxpayer money and they’ll be able to determine where that goes and it could go to your competitor."

The bill is expected to be approved out of a House committee in Lansing as soon as Sept. 20.