Man living inside his ArtPrize entry 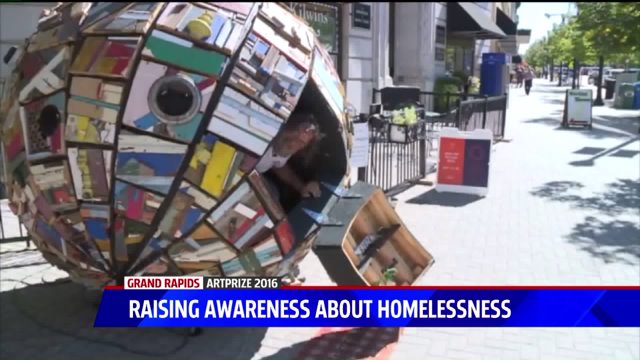 GRAND RAPIDS, Mich. - A man living in a giant wooden sphere on a street corner is grabbing a lot of attention ahead of ArtPrize.

Loren Naji is an artist from Cleveland, Ohio now living in an 8-foot-tall micro home until Oct. 8 outside Kilwin's Chocolates and Ice Cream off 146 Monroe Center. The piece weighs roughly 1,200 pounds and was built over 1,000 hours out of garbage and debris from demolished homes. It's held together with more than 1,000 screws, glue, and wood panels.

"It's called Emoh, which is home spelled backwards," Naji said. "It's about our backwards system of vacant houses and homeless people."

Emoh is equipped with wi-fi, electricity and a front-row view of downtown Grand Rapids. The piece was entered into the Time Based category and you can vote for Naji's  work starting Wednesday at noon using code 62624.

"So I cut out the door and put a bed in there and now I'm living in it," Naji said. "It's a home on three levels; our earth, it's made from houses, and I live in it."