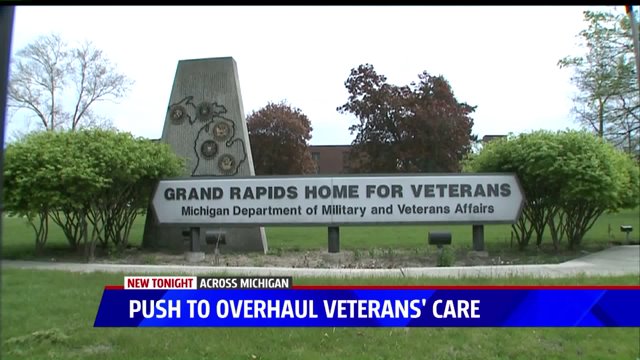 But critics worry this latest effort by lawmakers to fix the state's veterans health care system  will only continue to push state workers out in favor of more privatized care.

"It’s no secret that we’ve had some issues with care at the Grand Rapids Home for Veterans," said Sen. Dave Hildenbrand, R-Lowell. "We failed to give our veterans the highest quality of care they deserved, so we had to hit the reset button.”

Hindenbrand said he is part of a bipartisan effort in both the Michigan House and Senate aiming to investing in state-of-the-art facilities and improving long-term care for veterans.

"We’re looking to create an authority made up of veterans, health care experts and advocates, people in finance and business, who understand the scope of running a health care business like this to be able to provide services our veterans deserve," Hildenbrand told FOX 17.

A package of bills introduced in September would create a Michigan Veterans Facility Authority to oversee the management of new and existing veteran homes. The long term goal is to bring the entire statewide veterans health care system under an authority to replace the current governing structure enacted in 1885, according to Hildenbrand.

The proposed legislation comes in wake of a scathing audit of the Grand Rapids Home for Veterans in February which revealed persistent staffing issues, false claims of workers checking on patients, botched investigations of alleged abuse or neglect, and failure by staff to fill prescriptions on time. The audit's findings prompted an investigation by the Attorney General's office and staffing changes.

As a cause for many of the shortcomings cited in the audit, critics have long pointed to the decision to privatize care in the home by switching from state employees to contracted workers.

Mark Williams says the new legislation does little to protect from further privatization of care. He worked in the Grand Rapids home for 19 years before being laid off in 2013 and now serves as president for Local 261 of the American Federation of State, County and Municipal Employees, the union that represents the remaining 170 or so state workers at the Grand Rapids home.

"It has been one failed attempt after another to try to better the contract," Williams told FOX 17. "When we look at all the things that have happened at the Grand Rapids Home (for Veterans), it is just that: a failed experiment."

Williams said it's not the prospect of more state workers potentially losing their jobs that angers him but the inconsistency in the quality of care for those who have served our country.

"It’s almost like a warehouse now, and there’s not the caring there used to be," he said. "It seems like nobody has the integrity enough to stand up and say, ‘You know what, this is a failure. We can’t do this anymore. Something has to change.’”

But Hildenbrand contends that quality has already improved and this legislation will continue the trend.

"The privatization didn’t work out perfectly. We addressed that, we appropriated more dollars, we’ve got a new company now to provide services," he said. "The problem wasn’t the privatization, it was the contract. The company awarded the contract did not comply and live up to the agreements in the contract.”

Hildenbrand said that concerns raised by Williams and other critics are "shortsighted," arguing the goal is to create a better health care model, not to advocate for or against unionization or privatization. He said this legislation remained "purposefully silent" on specific day-to-day management.

"In the future, we don’t know what the best delivery model will be for health care. Maybe it is state workers, maybe it is contracted employees, maybe it’s a blend of both; but we didn't want to tie the hands of the authority," he said.

In order to make that happen, Hildenbrand says new veterans homes will likely have to be built to replace the existing aging facilities that are too costly to retrofit. The updates would prove necessary to meet standards required to become CMS Medicare and Medicaid certified, he said.

"You’re able to get reimbursed for a lot more of the health care expenses, but secondly and more importantly, I think is the oversight that’s done by CMS in our private homes that would also apply to our veterans homes," he said. Grand Rapids and Metro Detroit would be likely potential locations for new facilities, he said, while the D J Jacobetti Home For Vets in Marquette would likely see upgrades.

While Williams says he applauds most of what the legislation is trying to accomplish, he remains skeptical in trusting the state to make decisions in the best interest of veterans.

"There are just so many unanswered questions," he said. "I feel like they’re doubling down again on the backs of the veterans."

"We should be doing a better job taking care of them. Bottom line."