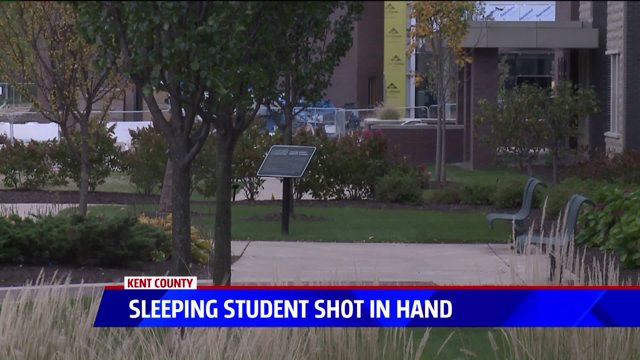 The Kent County Sheriff's Office says it was called to the university around 2:30 a.m. and found four people, who were not students, involved in an altercation with two students.

That's when someone fired shots that ended up penetrating a wall inside the dorm and striking a student who was not involved in the altercation.

The victim was taken to a nearby hospital for non-life threatening injuries and has since been treated and released.

Davenport Public Safety Director Matt Miller told FOX 17 that the shooting occurred in South Hall, which houses both male and female students. He said after an altercation in a dorm room, a student in a neighboring room was shot in the hand by a bullet that traveled through the wall.

Miller said the male student was asleep at the time he was shot and suffered non-life-threatening injuries.

Miller said two suspects who were not Davenport students fled the scene before police arrived. The student that the suspects were visiting is not cooperating with police.

An alert sent out to students from Davenport University's Public Safety Department says it is working with the Kent County Sheriff's Department to find the individual responsible and that there is no evidence of an ongoing threat.

Anyone with information should immediately contact law enforcement or Davenport University Public Safety at (616) 446-7098.

The alert sent out to Davenport students read:

A shooting incident was reported at the W.A. Letting Campus last night. A visitor to the campus was involved in a physical altercation in a residence hall and a student was shot. The victim was transported to the hospital privately to seek attention for a non-life threatening injury as a result of the altercation.

Stay connected to FOX17 news on air and online for the latest updates.