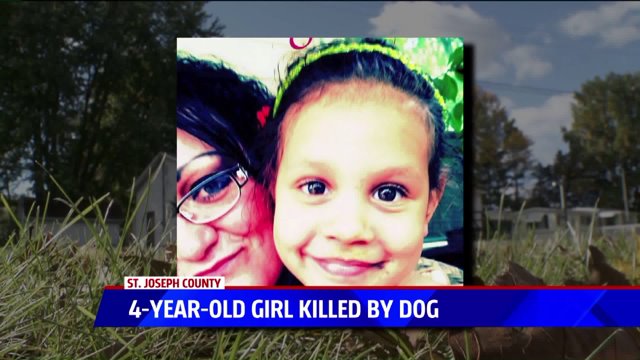 STURGIS, Mich. — Kiyana McNeal loved running over to her neighbors' house and hanging out with them. And the Kenneth and Rebecca Davis loved having her. Kenneth put in a gate for her to get to their home easier. She would rush through it, walk into their home like it was hers, and play with their recliner. She liked watching the foot rest go up and down.

She always said "I love you" whenever she left, Rebecca recalled.

Now the Davises miss her terribly, because Sunday afternoon Kiyana was attacked and killed by a dog she had just met.

Rebecca, 74, was in her bedroom when it happened. “I heard somebody screaming," she said during an interview at her home. “Then that’s all I heard. I went outside and I saw her coming out of the house carrying Kiyana.”

Rebecca said the Doberman attacked Kiyana in the little girl’s home. She was giving the dog a treat, which it sniffed a few times. They said it was on the third sniff that the dog  lunged at her and bit her in the throat and did not let go. Kenneth said it tossed her around like a “rag doll.”

“When they brought Kiyana out the house, I saw her mother had lots and lots of blood,” Kenneth said of Jacey McNeal Wolkins. “Any blood, it was from Kiyana.”

Immediately people from the neighborhood ran to help Kiyanna. One of the neighbors who heard ‘help, help’ called 911. Jacey called the guy who sold her the dog and brought it to her house five minutes before the attack. He turned around and sped back to the house.

“The man that brought the dog, he’s the one that started CPR first,” said Kenneth. “Then other people came. Centerville police came.”

Police took the dog to animal control while first responders tended to the body. They tried to revive her, Rebecca said, but nothing worked. The man who sold her the dog was crying.

“She had just bought the dog,” said Rebecca. “The guy probably handn't been gone maybe five minutes and just that fast, the dog attacked.”

Rebecca said during the attack, Jacey got in between the dog and her daughter and struggled to get the dog off. It bit her on her hands and neck in the scuffle. But she didn’t care.

Jacey sat near her daughter as people examined her body.

“It’s something nobody should see. Nobody,” said Rebecca. “I mean nobody.”

Jacey's wounds were cleaned at the hospital that night. She was released Monday morning. Family and friends have since started fundraising via a YouCaring page. Rebecca said Kiyana’s loss has already made a major impact on them.

"I looked forward to her graduating," said Kenneth. "Of course, I wouldn’t be around if she got married. But she was our girl."