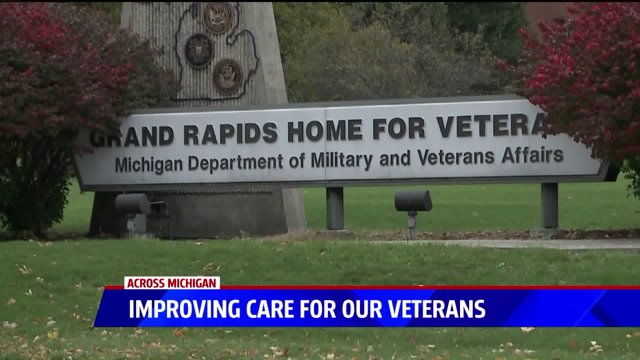 The House Bill 5639, now Public Act 314, is a direct response to the scathing February audit and loved ones' and veterans' testimony depicting conditions at the Grand Rapids Home for Veterans including: low staffing, workers failing to check on patients, and further claims of abuse and neglect like failing to promptly refill prescriptions.

Now the race for a Muskegon County seat in the House of Representatives is heating up with one of its central issues is care for our veterans.

"That's our goal is to make sure we have constant, consistent good care for our veterans," said Rep. Holly Huges, R - Montague.

Hughes sponsored HB 5639, which is one of several pieces of legislation working to improve veterans' health care statewide.

"Having better transparency and more reporting is always a good thing, but if we are simply making a report to make ourselves feel better about past actions that were taken, that were happening at the home, then I really kind of question is this just more big government," said Rep. Candidate Collene Lamonte, D - Montague, who was the former incumbent from 2013-2014.

Former state Rep. Lamonte is running to win back her seat from Rep. Hughes and says Hughes should not take credit for these improvements, pointing to Hughes' vote for a budget cut to veterans affairs in 2011 which she says lead to the privatization of the Grand Rapids Home for Veterans. Hughes says otherwise.

“Any time you’ve got greater transparency it’s a good thing," said Lamonte. "But I think it’s an attempt by my opponent to try to make up for her mistakes and voting for the privatization in the first place.”

“Actually it was a budget bill in '11 and the privatization did not take place while I was there, it actually took place in '13, and there was a budget bill for that then too, and [Lamonte] voted the same way," said Hughes in response.

Both Hughes and Lamonte call for using a small amount of the state budget to draw federal dollars for veterans' benefits alongside further actions.

“Our goal is you have healthcare facilities everywhere, so the Michigan Veterans Choice Card should be able to use wherever you need to seek medical help for our veterans," said Hughes.

“We need to look at getting the certified nurse assistants hired back at good pay that they are going to feel like they are a participating member and taking care of the veterans at the home," said Lamonte.

This newly signed legislation requiring quarterly updates is one of several pieces of legislation working to improve veterans' health care at state facilities. Earlier this year new legislation now instated an Office of the Michigan Veterans Facility Ombudsman in the Legislative Council to investigate health care complaints among other tasks. Additionally there is a package of bills currently introduced which work in part to expand state-run veterans' homes in Michigan.