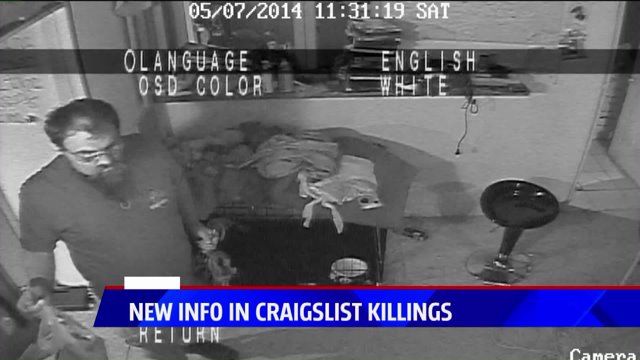 WYOMING, Mich. -- The investigation into the murder of a young couple, including an 8-month-old unborn baby, and suicide is closed after police released hundreds of documents and their findings Wednesday.

“This is not a characteristic of our community, certainly it’s an anomaly, and that our community still is populated with very good people with good hearts that do good things," said Wyoming Police Chief James Carmody Thursday, reassuring the public the case is chilling, and closed.

Hundreds of documents, pictures, and surveillance video reveal the investigation into Brady Oestrike, who killed a pregnant woman, her unborn baby, and her boyfriend before killing himself during a police chase in July 2014.

Police say the victims, Brooke Slocum, 18, and Charles Oppenneer, 25, met Oestrike on Craigslist before the killings. They agreed to meet Oestrike to trade sex for cash at Gezon Park, according to investigators.

In police records, investigators wrote that Oestrike filmed Slocum in one video, not released, from the basement as they filmed what "was obviously rehearsed and scripted by Oestrike in an effort to cover up his heinous actions against Brooke and her boyfriend, Charles Oppenneer."

According to records, in the scripted video, Slocum said was a week or two ago that Oestrike agreed to meet so that she could have a "true abduction kidnapping and ransom type of experience." Slocum explained that they would meet at the park then Oestrike would abduct her and hold her for ransom, when Oppenneer would pay with Monopoly money. Slocum said she was supposed to be captive for a week but she was having pregnancy issues so they were going to end the experience early.

Released videos show Oestrike installing, untangling and even wearing bondage equipment like chains and ropes connected to the ceiling near a dog cage. The videos show Oestrike seven days before police say he met Slocum and Oppenneer, July 12, 2014. Then, July 16, 2014 police found Oppenneer's body decapitated near an abandoned car; his head is still missing today.

The crime spree ended July 17, 2014 when Oestrike crashed during a police chase on a US-131 overpass.  He killed himself, and then officers found Slocum's body in the trunk.  She had been strangled.

Carmody and detectives have spoken with Oppenneer's and Slocum's family before releasing the investigation findings.

“It still certainly impacts them, still very emotional, it’s resurrecting all those emotions and feelings, as well as it’s done around here as well for our staff, "said Carmody. "It’s something they’ll never get over, it’s as simple as that.”

Pictures show Oestrike's home that was filthy, stock-piled with weapons, including medieval swords, knives, and guns. Then a map with pins marking cities is partly why Carmody says he involved the FBI. Ultimately, the investigations found no potential other victims. Police records show an ex-girlfriend told police that the pins represented where Oestrike hid food and weapons due to his fear of an apocalypse.

“Making sure that there was  no one else involved in this, and the potential for other victims, that’s why the FBI was brought in," said Carmody.

Stacks of police records paint a clearer picture of Oestrike. For instance a former girlfriend told police she moved in and signed sex slave contracts. She also said Oestrike would chain her up and lock her in a dog cage in the basement, up to 10 hours while he went to work, when she would disobey him.

Despite previous complaints from others who knew Oestrike, police say nothing suggested murder.

“Our involvement with him was very limited more in domestic violence type of a situation than anything else," said Carmody.