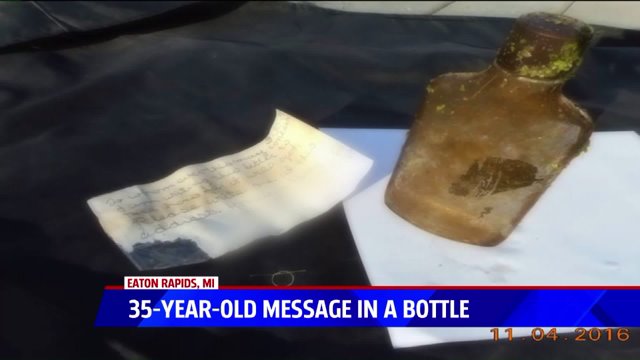 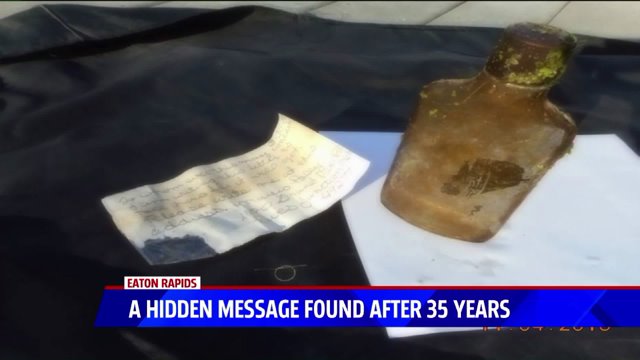 EATON RAPIDS, Mich. – As Nathan Foote drudged through the waters of the Grand River, picking out pieces of garbage and debris, something caught his eye that turned out to be the find of a lifetime.

It was a liquor bottle, rusted and empty. The bottle wasn’t worth money – it wasn’t an antique and it wasn’t some rare brand. In fact, it wasn’t even the bottle itself that made this particular discovery so amazing. It was the message inside.

“I actually thought it was just normal litter,” said Foote, speaking on the phone with FOX 17 today. “I looked down and saw that and thought, ‘what in the world is that in that old bottle?’”

Turns out the note, rolled and tied with a piece of fishing line, had made its way down the waters of the Grand from Rives Junction, Michigan. Its author was Marcia Polly, who, to Foote’s surprise, had penned the note nearly 35 years prior.

It took all that time for someone to come across it.

“I was just a kid. I was still in school in my last year,” said Marcia. “I walked the Grand River almost every day. I had to walk almost a mile to catch my bus.”

“I didn’t even think it would go anywhere. I thought it would probably get stuck or broken or whatever.”

But Foote did find it, and this is what it said:

“To whomever this may concern, I am writing this letter to see how far it will get. Please write me at this address.”

Going on to provide her contact information, Marcia screwed the lid on tight, and tossed it optimistically over the edge of a bridge. Over three decades later, she got the response she had forgotten she’d asked for.

“I would have never guessed that 35 years later that I would actually hear from somebody. Because I had forgotten all about it.”

Foote used social media to get in touch with Marcia, and the two have plans to meet in person soon. It just goes to show you that with each day, you’ll never know what you’ll find, and even the most unassuming discoveries can be something amazing.