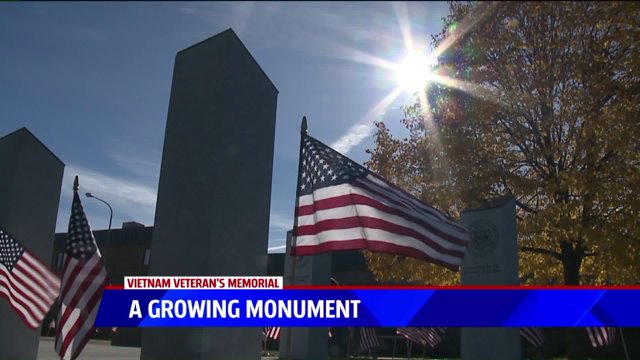 BELDING, Mich. – The newest addition to the still unfinished Vietnam Veteran’s Wall at the Belding Veteran’s Park will hit home for many familiar with the area.

In addition to the already erected wall mimicking the same iconic triangular shape of its sister-monument in D.C., along with a separate granite tribute to those who went missing in action, the monument area now features five pillars depicting the stories and faces of five fallen Vietnam vets from the Belding area.

"It’s kind of a little personal thing so I’m honored,” said Denny Craycraft, the brains and designer behind the entire Belding Veteran’s Park and a Vietnam vet himself.

"These five guys – I went to school with,” he said. "You’re just trying to do your job and get home and they were doing the same thing. Just teenagers is all these guys were."

Young, but heroic – and Denny wants people to remember their sacrifice. The pillars will be officially unveiled by members of his fallen comrades’ family on Friday, which also happens to be Veteran’s Day. Eventually, the wall behind them will bear the names of the 2,654 names of those soldiers who fell in the conflict that called Michigan home.

"We made a commitment to ourselves, amongst ourselves, we would make sure that no veteran would be treated like we did when we got back,” said Craycraft. “And by God it's working."

It wasn’t without a great deal of hard work. Craycraft and his devoted staff of volunteers raised roughly a quarter-million dollars for the park at large – nearly $165,000 for the Vietnam portion alone. The park features memorials to those who served and fell in all major American conflicts, all paid for through donations.

"If you'd have told me I was going to raise a quarter-of-a-million dollars to get this park done I’d have laughed at you,” said Craycraft. “But it's been an adventure that…I’d do it again in a heartbeat.”

But the work doesn’t stop. Craycraft hopes to have the wall and thus, the entire monument, completed by next Memorial Day.

They’re about halfway to their fundraising goal, and you can help. For more information or to make a donation, log onto the Belding Veteran’s Park Facebook page or visit the Vietnam Veteran Wall’s website.