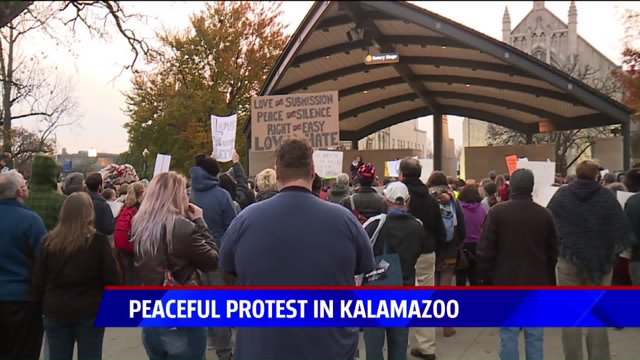 KALAMAZOO, Mich.— Over 100 anti-Donald Trump protesters gathered in Bronson Park in Kalamazoo Tuesday night.  It was a peaceful protest against the President-elect’s plans for his first 100 days in office.

“We cannot dismiss the fact that sometimes the loss of the land needs to be overrided by the loss of ethics and the loss of humanity and that’s why I am here speaking for my community,” said Nellie Fuentes.

“I think this is truly what democracy looks like,” said Fuentes.

President Barack Obama told people earlier this week that he was surprised by the election results.

“I still don’t feel responsible for what the President-elect says or does, but I do feel a responsibility as President of the United States is to make sure that I facilitate a good transition and I present to him, as well as the American people, my best thinking, my best ideas about how you move the country forward,” said President Obama.

People like Jay Maddock, the executive director of the LGBTQ Resource Center in Kalamazoo, said they’re afraid of what their future might look like in Michigan.

“I think people are afraid of what that means for their day-to-day lives in Michigan along with 26 states you can be fired for being LGBTA and you can be kicked out of your house. I think there is a lot of fear and I think it's all legitimate,” said Maddock.

On Tuesday, Senate Minority Leader Harry Reid spoke out in Washington, and criticized Trump for a string of hate crimes happening across the United States following the election.

“So I say to Donald Trump, take responsibility. Rise to the dignity of the office of President of the United States. Stop hiding behind your Twitter account. And show America that racism, bullying and bigotry have no place in the White House or in America,” said Reid.

In a 60 Minutes interview, Trump said he would tell people to stop using hate and violence against others of different races and that it’s “terrible,” but he is “going to bring the county together.”   It was a sentiment that many at Bronson Park said they just don’t believe.

Kalamazoo’s Michigan United is having another event on Dec. 14 from 6 to 8 p.m. The location is to be determined. They are having a discussion about policy reform to combat Donald Trump’s 100 day action plan. Specifically, this would be policy reform for Kalamazoo at the local level. For more information head to their website.