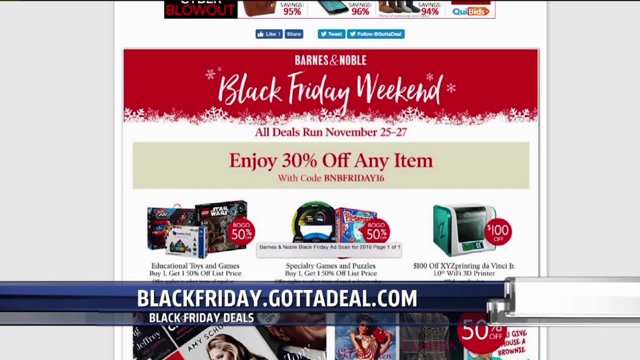 It's the most wonderful time of the year where the prices are falling and the deals keep on coming. We're talking about Black Friday, and some stores have already kicked off their Black Friday deals.

Here's some of the big doorbusters to keep an eye out for over the holiday weekend.

If you want to be a part of the rush, Walmart will be opening its doors at 6 p.m. on Thanksgiving Day. Some hot items on sale include DVDs starting at $2, video games starting at $8, a Philips 55 inch 4K TV for just under $300, and the iPhone 5S for just $99.

If you have the Walmart App, you can access exclusive deals that aren't available in the store or on their website. Plus you can find a map for your local Walmart so you know where to find all the holiday deals.

Don't want to step into the chaos? You can still shop online for some good deals, but you'll miss out on the deals that are exclusive to the physical store.

Target is also opening its doors at 6 p.m. on Thanksgiving, and they're having a big sale on Apple products!

If you don't want to stock up on the Apple gear, there's still plenty of other discounts going on all week. There's the option to buy one get one 50 percent off select toys from Star Wars, Marvel, Disney, and more.

There's also a deal where you can get 30 percent off all apparel, accessories and shoes for the whole family.

Also if you haven't gotten a head start on Christmas decorating, for every $100 spent on any holiday decor you'll get $50 off! This offer is only good on Saturday, November 26.

Plan on doing all your shopping online? Amazon is offering all their best Black Friday deals on a variety of toys, electronics, home goods, and more starting on Wednesday.

Amazon claims they'll have the lowest prices on electronics like Samsung, LG, and Sony Televisions with discounts as high as 50 percent off.

They're even discounting their own products like the Amazon Echo and Tap being marked $40 lower than the original price.

A majority of these deals will be during the Turkey 5 starting on Thanksgiving Day and go though Cyber Monday. The deals change every day, so be on the lookout for that special gift for a great discount.

As you're looking through these Black Friday ads and deals, make sure you're reading the fine print.

One deal in particular is for JC Penney, where they promise early shoppers discount coupons for as high as $500.

JC Penney is giving early birds coupons for either $10 off, $100 off, or a whopping $500 off your purchase, but there's a catch. The Consumerist read the fine print of the ad and says each store will give out only one $500 off coupon. Meanwhile one out of every 100 coupons will be for $100 off, and the rest will be $10 off coupons.

So make sure you're keeping a sharp eye on these Black Friday Deals, because if a deal is too good to be true, it probably is.

To check on if any other stores are holding any Black Friday specials, just check out BlackFriday.GottaDeal.com!

This is the website to find all of the hottest Black Friday deals in the area without leaving the house.

Just click a store from the list of retailers and it will immediately show you the store's Black Friday ad. Or if you're looking for a specific item, just type in the item name in the search bar. The website will pull up all the stores where you can find it along with the discount.