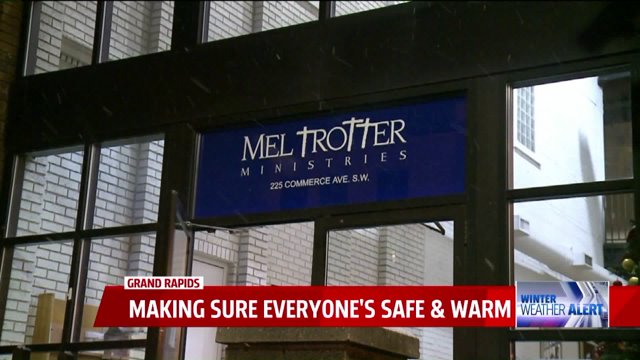 GRAND RAPIDS, Mich. -- The Grand Rapids Police Department is teaming up with Mel Trotter Ministries to make sure the city's homeless population has somewhere warm to go this winter.

Officials are going around and checking on those who are sleeping outside, and personally helping them get to Mel Trotter.

"We have about 465 beds here at the mission so those will be at capacity most of the time,"

Wednesday night was the first night officers made this effort, coming into contact with 10 people and helping five to Mel Trotter.  The others refused.

"If they refuse or do not want to seek shelter, that is okay," said GRPD Sgt. Terry Dixon.  "They are not breaking the law, that's completely up to them."

Mel Trotter vows to not turn a single person away.

"We have about 465 beds here at the mission so those will be at capacity most of the time," said Mel Trotter spokesperson Abby Sladdick.

At any time of the day or night, even if you have been asked to leave before for breaking the rules, Mel Trotter wants to help keep people alive.

"Other agencies take just men or just women.  Wwe take anyone that comes to our doors that is homeless," Sladdick said.  "That could be someone who struggles with addiction, or mental illnesses.  Men women, children; we see lots of families this time of year."

Grand Rapids Police are asking the public to call them if they see someone sleeping outside this winter.   You can contact them at 616-456-3400.