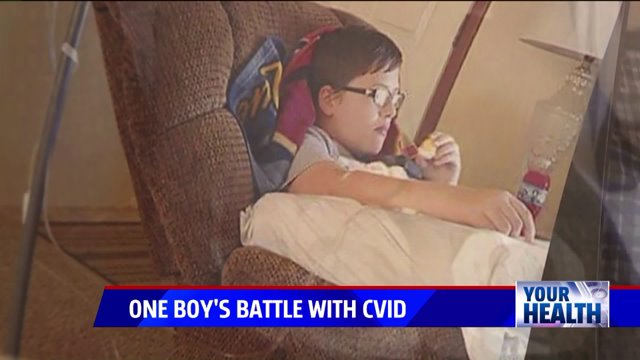 HOLLAND, Mich. -- When moms and dads are dealing with a sick kid, it's usually as simple as a day or two home from school, chicken noodle soup and plenty of rest.

But Brayden Bowker, 12, hasn't missed just a couple days this year; he has missed 13 days of school this year because he has a life-threatening condition called CVID, or common variable immune deficiency. While his immune system isn't working, he is working to raise awareness about the disease that affects one in every 30 thousand people.

Brayden loves NASCAR, video games and hanging out with friends, exactly what you'd from a boy his age. But what you don't expect is what's going on inside.

CVID has made him miss 13 days of school already this year. People who suffer from CVID are highly susceptible to infections and have a tough time fighting them off, because their bodies create little to no antibodies.

Brayden says he often catches a cold, flu, or strep. He gets sick about once a month. And the illnesses are harder on him: "For the people like me that have CVID, a cold can hit us worse than it can other people."

"With everybody not getting their flu shots and all that, we gotta make sure they get hand sanitizer so they don`t pass it on to me," Brayden said.

Diagnosed at six years old, Brayden will have CVID for the rest of his life. His mom Stacy Bowker says it's a disease so rare that some doctors don't even know it exists.

And the worst part is that there's no cure.

"People with CVID, their body rejects vaccinations," Stacy said. "It`s hard. There's nothing I can do about it. You ask people to not come around when they`re sick."

Brayden told FOX 17 that CVID is affecting his social life in addition to his education. And school work is piling up.

The video game lover receives monthly IV treatments of antibodies intended to stop recurring infections. While the side effects are awful, Brayden is left with no other choice, because "he's allergic to the meds, and these are lifesaving meds. If he doesn`t get them, he`ll die," Stacy said.

Stacy and Brayden both cherish the days the blue-eyed boy feels healthy.

Plasma donations made at BioLife Plasma, or other plasma centers are not donated to hospitals or patients. Instead, plasma centers sell the plasma they collect to research, pharmaceutical and cosmetic companies, according to Michigan Blood. Hospitals only accept blood and blood products that come from volunteer (unpaid) donors.