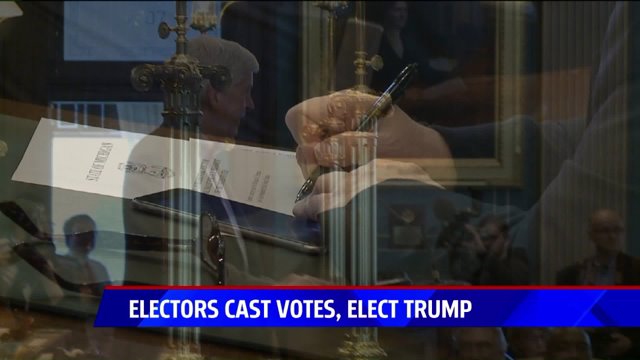 LANSING, Mich. — It's official. Michigan's 16 electoral votes were cast Monday for President-elect Donald Trump, the first time since 1988 that a Republican nominee has captured the state.

An effort by anti-Trump forces to persuade Republican electors to abandon the president-elect came to practically nothing and the process unfolded largely according to its traditions. Trump’s polarizing victory Nov. 8 and the fact Democrat Hillary Clinton had won the national popular vote had stirred an intense lobbying effort, but to no avail.

Electors were met by protesters inside the Michigan Capitol on Monday, loudly denouncing Trump.

Dozens of people holding anti-Trump signs rallied on the Capitol steps in 17-degree weather Monday before taking their shouts inside the warmer building. They're calling Trump a "racist" and a "sexist," and they want him to "go away."

Lansing - Protests at the Electoral College

The 16 electors in Michigan — one from each congressional district and two at-large — are required to vote according to the results of the Michigan’s presidential election. The 16 electors each signed a ballot supporting Trump.

There was no sign of dissent among the electors, who were 16 Republican Party members picked months ago at a GOP convention. Trump defeated Democrat Hillary Clinton by less than 11,000 votes, the narrowest margin in state history.

“We have a process, I’m respecting the process and he won by that process,” said Joseph Guzman, an elector and assistant professor at Michigan State University’s School of Human Resources and Labor Relations. “He’s my candidate. If there were no rules, I would vote for him, too.”

Unlike some other states where electors are “unbound,” those in Michigan are bound by law to vote for the state winner. If a Michigan elector doesn’t vote for that person, they are deemed to have resigned and are replaced.

Gov. Rick Snyder chaired the ceremony, which lasted about 40 minutes. He's the highest-ranking Republican in Michigan but hasn't disclosed whether he voted for Trump. He said he considers it a private matter.

With all Republican states reporting, Trump lost only the two electors in Texas. One voted for Kasich, the Ohio governor; the other voted for former Texas Rep. Ron Paul.

Several Democratic electors in other states tried to vote for protest candidates but they either changed their votes to Clinton or were replaced.

The Electoral College has 538 members, with the number allocated to each state based on how many representatives it has in the House plus one for each senator. The District of Columbia gets three, despite the fact that the home to Congress has no vote in Congress.

Electors had been deluged with emails, phone calls and letters urging them not to support Trump. Two Texas electors cast protest votes against Trump, but in the end he had more than he needed.