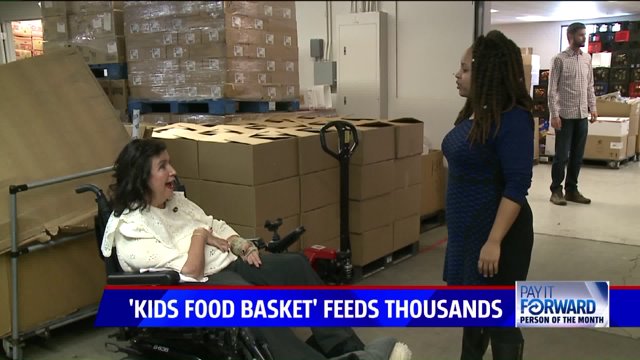 One woman`s mission to fight childhood hunger is making a big impact in West Michigan.

GRAND RAPIDS, Mich., -- Mary K. Hoodhood is the first person to tell you that anyone can make a difference.

"You’re only as limited as the limits you put on yourself," she told FOX 17 News. "Whether I was injured or not, I’d be doing the same thing I am today."

Hoodhood is a quadriplegic as a result of a crash in 1980. She is also the founder of the wildly successful organization, Kids' Food Basket.

"I can’t sleep at night thinking about a child on the street, or around the corner, is going to bed hungry when we can do something about it," she explained. "I always say it’s not rocket science, you’ve got volunteers over here, and you’ve got food and you’ve got the need. Put them together and feed some kids.”

Hoodhood began her mission to fight childhood hunger, after hearing a heartbreaking story about a little girl digging in a dumpster at school for her next meal. The school's principal, a close friend of Hoodhood, contacted her about the situation, and the rest is history.

Hoodhood, a longtime volunteer for Meals on Wheels at the time, knew just what to do.

"I was in the business of feeding kids anyway, well not kids – people," she said. "So I knew what it took, to get the volunteers, to get the food, to get the program going and coordinate all that. And that’s the key.”

She launched Kids' Food Basket, attacking the childhood hunger problem one sack meal at a time.

Hoodhood is still very much a part of the operation, alongside an army of dedicated volunteers.

“[Her] vision is the reason why we’re all here today, doing this work. Why these hundreds and thousands of volunteers are coming to Kids' Food Basket to prepare, pack and deliver meals every day,” explained Afton DeVos, Associate Director of Kids' Food Basket. “She’s such an inspiration to us because it allows us to constantly be in remembrance of the fact that personal barriers should not hinder your passion.”

Hoodhood has received numerous honors for her efforts over the years, including the "Presidential Citizens Medal", awarded by President Obama in 2010.

As the Pay it Forward Person of the Month, Hoodhood is receiving a $500 prize.

Meet, Lisa Cober, our November Pay it Forward Person of the Month.