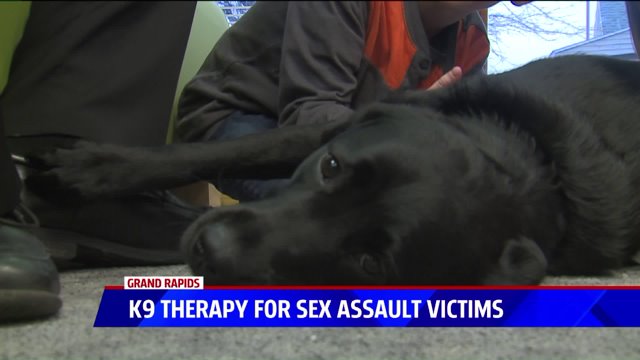 GRAND RAPIDS, Mich. – It’s a new way of using K-9 intuition, by helping children dealing with some of the worst kinds of trauma.

This week a therapy dog began working at The Children’s Assessment Center in Grand Rapids, a place where sexually abused kids are learning to heal.

Typically, a police dog is used for things like drug enforcement or suspect searches. But a mixed lab named Jaycee is using her natural ability to be affectionate to heal some of the deepest wounds suffered by West Michigan’s youngest victims.

"The kids that come in here are sometimes the victims of some of the worst crimes that you could think of," says Detective Matt Hooker with the Kent County Sheriff’s Department.

Therapists at the center say they see anywhere from 40 to 60 children come through on a weekly basis, with most being between the ages of 4 and 12.

Now, those kids will be greeted by a new and furry face as they come to deal with some very traumatic issues.

"Just having that brief interaction with Jaycee helped her go on with her day,” says  Ashley Jansma, the lead therapist at the Children's Assessment Center. “They get to just focus on being a kid, and experiencing her childhood, which is really what our hope is for anyone coming through our center."

Jaycee is greatly helping the children get through the therapy process.

"Instantly they are all so thoroughly excited,” says Sarah Zuidema, clinical services manager at the center. “'It's a dog' they say. They'll crouch right down and want to pet her."

The dog comforts the children during a difficult part of therapy known as trauma narrative, where the children write out their traumatic ordeal and practice telling it. But therapists have the children tell Jaycee their story, making it much less intimidating.

And while detectives work to put the abusers behind bars, Jaycee’s job is to be the loving, affectionate companion the children need.

The center and the sheriff’s department say they’re hoping to expand their therapeutic dog project.

More on how you can help the therapeutic dog project can be found at the Kent County K-9 website.