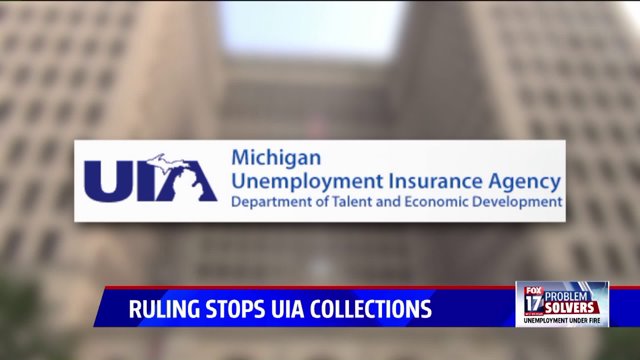 DETROIT, Mich. -- Today, the Michigan Unemployment Insurance Agency has agreed to stop collecting money from people who've been accused of fraud. Plaintiffs in a federal lawsuit against the UIA pushed for this action.

Judge Robert Cleland signed an order for the state to stop all collection activities, including "wage garnishment, federal and state tax return garnishment, invoices, bills or payment plans." The state agreed with it. The fraud determinations must have been made between October 1, 2013 and August 7, 2015, according to his ruling.

The FOX 17 Problem Solvers have been investigating the false fraud accusations levied against thousands of citizens for nearly two full years now. These are questionable accusations because of a failed computer system known as MiDAS. The 'robofraud' led to a 93% error rate after 22,427 cases were re-reviewed, according to the UIA.

The lead attorney on the federal lawsuit against the UIA contacted the Problem Solvers with the update. Attorney David Blanchard said the State Attorney General's Office, which represents the UIA, came to an agreement with him and the plaintiffs on this temporary measure. Since there are about 30,000 questionable fraud cases under review right now, the parties decided it was best to hold off on taking any more money from citizens.

Federal lawsuits move at a snails pace, and this is something Blanchard has been fighting for since 2015 when he filed the suit.

Blanchard said, "There has to be a point where they recognized and the AG's office recognizes that this is not a defensible case, and we're starting to see those cracks in the wall."

He added, "We're starting to see indications that there's not a defense anymore and there needs to be a remedy, a fix for people caught up in this system and that's what we're fighting for."

The timing couldn't be any better for the thousands of people who are affected with tax time right around the corner. The state has 45 days to stop collections.