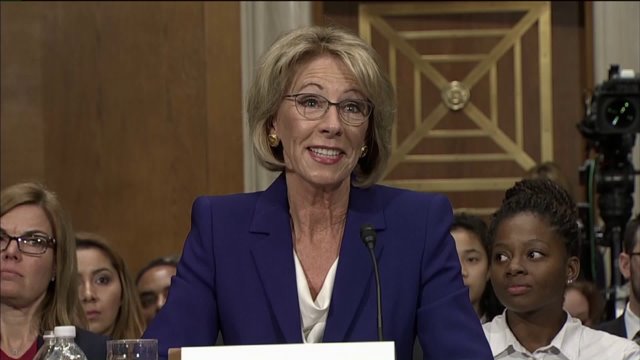 WEST MICHIGAN -- Betsy DeVos's confirmation hearing attracted about 30,000 pair of eyes to the FOX 17 Facebook page's live stream Tuesday. The event brought with it many opinions for and against DeVos as President-elect Donald Trump's Secretary of Education.

Criticism often centered around DeVos' qualifications and experience, or lack of, for the position and her policies concerning public schools.

Senator Bernie Sanders asked her, "Do you think if you were not a multi-billionaire, if your family has not made hundreds of millions of dollars of contributions to the Republican party, do you think you would be sitting here today?"

Here are some thoughts and opinions voiced on social media from West Michigan viewers about the hearing:

Sharen Schavey said, "She is a lovely person, with class. I like her and believe she is sincere in wanting what is best for education and the children."

Kay Herp stated, "She WAS CLUELESS! How can you revamp something you know nothing about! Saying her plans are what "parents want" is CRAP. She wouldn't bring herself down to work with or speak with low income parents!"

Mark Richards suggested, "Every teacher in America should go on strike starting tomorrow."

Jean Kennedy quipped, "I guess tomorrow I'll stop by the hospital and perform brain surgery. Apparently, having education and experience in any given area is no longer a necessity."

Phil Platko said, "Our school system needs change, like the rest of America. .. I pray for and support our newly elected & appointed Government."

Jere Johnston stated, "Unable to answer a single question but looks forward to working with the senators. A lot of gas."

Nominees cannot be sworn in until after President-Elect Trump is inaugurated.