Mother loses son to suicide, wants to send message to other kids who might feel the same 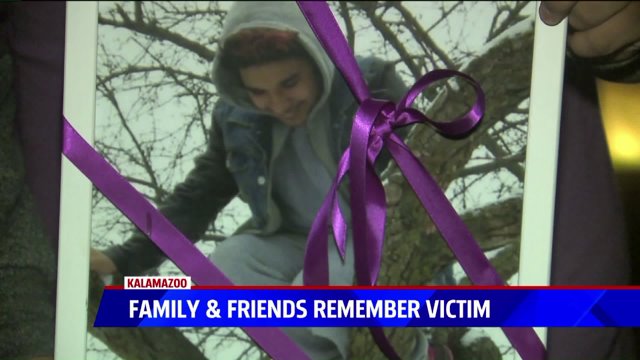 KALAMAZOO, Mich. -- It has been four days since a sophomore at Loy Norrix School in Kalamazoo took his own life. His family said they're blindsided by his tragic decision. Now they are looking for opportunities to tell others who might feel like their son to get help.

A vigil was held in Milham Park on Tuesday night. Hundreds of friends and family members showed up to light candles, share memories and listen to Alex Sanchez's mom, Joanna, speak to them.

She said she is trying to cope with her son's death by making it her mission to help other kids his age. She said she never saw suicide coming, but now she's learned some of his friends knew he talked about taking his life. Now, this grieving mother has some advice to other parents and students out there.

Sanchez was one of six siblings, and the youngest, Carlos, was there Tuesday wishing he could see his big brother again.

"He was the best brother I ever had," said Carlos.

Joanna said she knew her son had trouble sometimes, but didn't think it was to the point of suicide.

"I hurt because I didn't know what was going on in his mind," Joanna said, "I know it's been said that he felt too much on his shoulders. That everyone expected the most from him and all he could do was give the least."

She wants to make sure her son's death can help the next person that might feel like Alex did.

"There is help out there. Talk to somebody if you have a friend that comes to you in confidence, and tells you they feel that way. If you are a real friend you will tell somebody else that can help," said Joanna.

Visitation for Alex is set for this Saturday at 10 a.m. at Faith Temple Church of God in Kalamazoo. That's followed by a memorial service at noon.

If you are depressed, or having suicidal thoughts, or know somebody who is, you can call the National Suicide Prevention Lifeline at 1-800-273-8255.