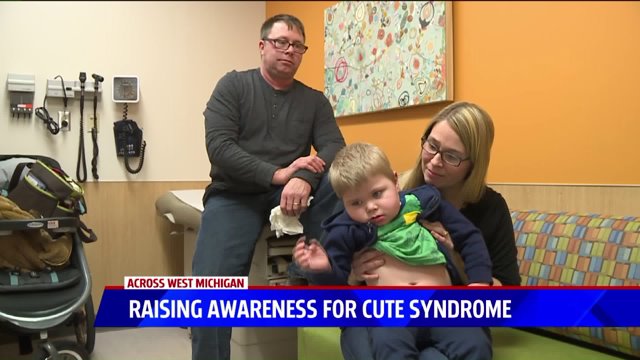 GRAND RAPIDS, Mich. -- Doctors say so-called Cute Syndrome is an incredibly rare genetic disorder with only about 100 known cases in the world, and one of them is a young boy in Grand Rapids.

The disorder is SCN8A epilepsy, which causes severe seizures. The Kooistra family found out just months that their toddler Liam has it.

Now, they are looking for a way to improve his quality of life.

Liam is 2-and-a-half years old, but his mother says he's like a 5-month-old child. He can't walk or talk, and he doesn't eat regular food.

When Liam was born, his parents knew something was wrong, they just didn't know what. "When I was holding him in the hospital room, he started having seizures in my arms, and I knew something obviously was not right," said Liam's dad, Jeff Kooistra.

"Liam could have been diagnosed when he was an infant, if we could have gotten the genetic testing," Tammy said.

Now, Liam frequently visits a neurologist as they try a variety of medications to help treat him.

"I wasn't aware that epilepsy can cause a child to be handicapped like this," Tammy said.

Doctors say life expectancy for this disorder can be around 10 years but that sudden death from a seizure can also happen. And there could be others like Liam who are waiting to be diagnosed.

"There's only a handful (of cases) that's known so far," said Dr. Daniel Fain, a pediatric neurologist at Helen DeVos Children's Hospital. "Probably the number will go up as better detection methods rise."

"It would definitely benefit these kids to have more funding to do research on it," Jeff said. "Maybe they can find a better medicine or a cure."

The Cute Syndrome Foundation has a website and accepts any kind of donation.

Feb. 9 will be the first Cute Syndrome Awareness Day. It's in honor of Dr. Michael Hammer, a geneticist who discovered the gene mutation. His daugther died from the disease, and her birthday was Feb. 9.