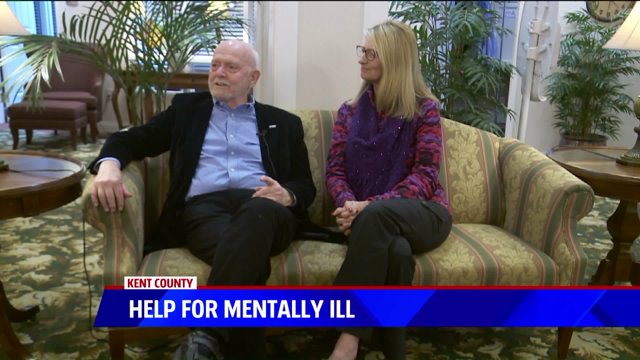 KENTCOUNTY, Mich.—30-year-old Jonathan Sper died Tuesday after being shot by a Kent County Sheriff’s Deputy. His family said he was dropped off at his brother’s house in a manic state. When his brother couldn’t calm him down after several hours he called 911 for help.

Sper didn’t listen to the deputies’ commands, and a fight broke out. It ended with Sper shot and he died at the scene. Now, his family is working to raise awareness of mental illness.

The National Alliance of Mental Illness, the group the Sper family is asking family and friends to donate to in his memory talked to FOX 17 News on Friday. The alliance said our community still has a long way to go in terms of the labels around mental illness, and the training that our community needs to go with it.

Dooley said he calls it like he sees it and the biggest problem in communities in caring and understanding the mentally ill is stereotypes.

“If the statistics are correct then 1 in 5 or 1 in 4 of all of us right now are struggling with some kind of mental instability, whether it be a depression all the way up to a schizophrenia,” said Dooley.

NAMI is a national organization based in Washington D.C. They have been in Kent County for 20 years making strides in caring, supporting, and providing education for the mentally ill and their loved ones, but Dooley said there’s still a long way to go.

“They say he is a schizophrenic and you say wait a second, you don’t point to somebody and say he is cancer,” said Dooley

A board member of NAMI Kent, Gwynn Bult, said their education outreach is key.

“Most people with a mental illness are harmless, but I don’t think that’s what most people believe because of the stereotypes out there,” Bult said.

NAMI is the organization Sper’s family is asking people to donate to in his memory. The family released a statement Wednesday saying he was in a manic state the night of the shooting.

“Today I got a call from Stephen who lost his brother and the first thing you do is just say my God as a parent or as a family member it's just grieving. Your heart just bleeds,” said Dooley.

NAMI Kent said it’s not just education for families and friends of the mentally ill that we need, but people working in our police and justice systems.

“NAMI has a course called CIT, crisis intervention training, but of course to give that kind of training to the police officers is expensive because you have to have police officers and take them out of service for their duties for a whole day,” said Dooley.

Sper was just released from jail the night he was killed after dining and dashing, and refusing to give his ID to police.

“We need to get a mental health court here in the city.  That means we have to find a judge who is willing to do that, and a crisis center for people, so that there’s some place for 24 hours you can get somebody to and get them debriefed and stabilized before you willy nilly send them to jail,” said Dooley.

The Sper family has already been in contact with the Kent County Sheriff’s Department to be advocates for how the mentally ill are handled, according to their statement. The undersheriff of Kent County, Michelle Lajoie-Young, said they are not ready to talk in detail about what they are going to do in terms of training in handling the mentally ill moving forward, but they will be announcing it soon.

“We do have some training but there is some more specific training that there is an initiative to bring to Kent County and we are working very hard on to get. We brought the family in yesterday and kind of talked through some of the things that are in progress that are being worked on right now in the broader criminal justice community and they were very supportive,” said Undersheriff Lajoie-Young.

Dooley said this is a huge step in the right direction especially for those living with loved ones that are mentally ill.

“You think of them all the time, so when I got a call from Stephen today, our family wants to tell our friends to donate to NAMI. It’s the heart bleed of knowing what they have lost,” said Dooley.