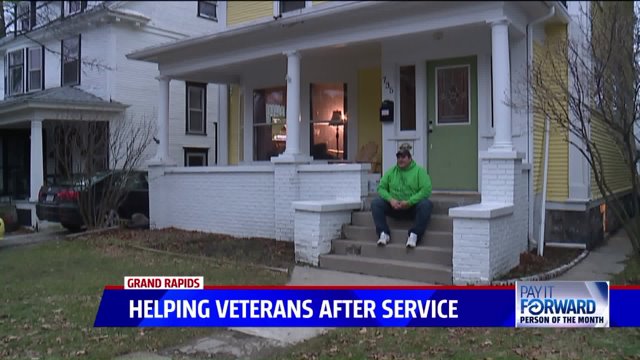 A Marine Corps Veteran has opened his home in Grand Rapids to help homeless vets.

GRAND RAPIDS, Mich. -- Joe Clemens has been back to civilian life for awhile now, but he's still fighting to help his fellow man.

"No man left behind. That's the way I've lived my life," he told FOX 17 News. "When I got out, nobody helped me, so because of that, I wasn't going to let that happen to anyone else."

Despite battling a rare and terminal blood disorder as a result of his service, Clemens has made it his mission to help veterans who are struggling.

"They're not gonna fall through the cracks," he said. "To come back, and not be able to feed your family, it takes a toll on you."

Clemens is a Service Officer at American Legion Post 459. His job is to help veterans navigate different resources to secure their benefits and get
back on their feet.

But he's taken his efforts one stop further by opening his home to help even more veterans.

"I bought a house and I didn't need all the rooms, so I started bringing in veterans that needed help," Clemens explained. "If they need food, I buy them food... If they need clothes, I give them clothes."

Clemens estimates that he's helped as many as 60 veterans over the past 8 years.

Depending on their situation, they are allowed to stay weeks, or months to get back on their feet. Clemens said he often charges little, if anything for rent.

"It's just so selfless," said retired Army Sergeant Jesse Pahman. "He's bringing people off the streets. And he doesn't ask any questions."

"He's a remarkable man", added Jim Hause, who also retired from the Army. Clemens helped him and his family travel to California in December to see his son graduate from the Marine Corps. Hause said he couldn't afford to go on his own, and nearly missed witnessing the special milestone.

Clemens is currently housing three veterans, along with himself and his service bulldog near downtown Grand Rapids. He's begun renovations on the home to expand the number of veterans he can help at one time from 3 to 6.

And his mission is far from over. Clemens takes pride in knowing that he's playing a part in seeing so many veterans succeed.

"Seeing somebody live the dream that we fought for is pretty awesome," he said. "Seeing somebody succeed and really being able to live their life, that's the reward. It's bigger than me."

Clemens is the January FOX 17 Pay it Forward Person of the Month.

Meet Mary K. Hoodhood, the December Pay it Forward Person of the Month.